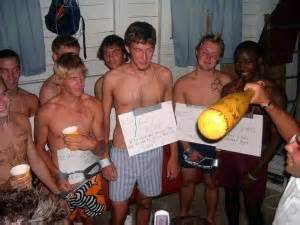 With the recent troubles that had cracked down on several universities regarding their hazing, we felt it was only necessary to show how much worse it actually could of been. Although we are unaware of the details of their allegations, we’ve decided to take a look around the nation for some of the most unbelievable hazing rituals known to Greek Life.  Nemann Law Offices gives free consultation regarding crimes charged as a result of hazing related activities.

Although we do cherish our friends dearly, under no circumstances would we ever be caught dead in these situations. Take a look at some of the worst rituals college undergrads have ever conceived:

No, this isn’t the kind of " Sharpie Rape " you see in most schools that really just means getting marked on by a Sharpie (a permanent marker) unexpectedly. This is actual, sexual, penetration; using a Sharpie. In 2002, seven football players from Methodist College in North Carolina were arrested on hazing charges for restraining a freshman, stripping him of his underwear, writing all over his butt and smacking it numerous times. The worst part is that to "seal the deal", as it were, the player with the most ironic position-name, Antonio Wilkerson (wide receiver for the team) sexually assaulted the freshman athlete with a Sharpie marker after everything had been said and done. He, along with the other Methodist players involved, were suspended after their November 14 arrests and did not partake in the team’s final game; unfortunately because getting benched, or even sitting down, was probably the last thing on the victim’s mind.

Sororities are just as sexually cruel, if not infinitely moreso, than Fraternities. Looking at this list, it’s apparent that the women in Sororities are more interested in emotional and social humiliation than the males. Males tend to angle towards the physical feats of strength or disgustingness. Both (freely) exercise public humiliation, but the levels of both differ and definitely run deeper in female circles. For example… The Hazing Prevention Center, one of the leading non-profit organizations working to eradicate hazing, receives hundred of emails from traumatized victims of sorority and fraternity hazing. One e-mail was from a girl who reported that she had to either use a dildo in front of all her "sisters" or take a hit of cocaine. So it’s either your morals… or your morals? Or your common sense vs… your common sense? It’s a toss-up, but an elicit drug that can cause permanent brain damage and is HIGHLY illegal or sexual, social, public humiliation? Which would you choose?

At Tulane University, pledges for Pi Alpha Kappa were put under boiling water for the most physically enduring pain they’d ever had. Fraternity brothers used boiling water containing pepper spray and a "crab boil" seasoning mixture containing cayenne pepper to pour over their victims’ backs. Oddly enough, the ones who screamed didn’t get burned as badly, but those who held it in got the worst of it. As the evening went on the water get hotter and the burns get deeper. One pledge suffered second- and third-degree burns to his back, chest, buttocks and genitals and was subjected to twice-daily burn treatments by doctor’s orders. He was also not able to take his exams or travel that semester. 10 of the "brothers" faced charges of aggravated second-degree battery; so needless to say, justice was served as they seemed to end up in some pretty hot water.

In a story run by ABC News, author and researcher Alexandra Robbins reported that the worst kind of emotional hazing she saw in sororities was "boob ranking." In this procedure, the sisters forced pledges to strip off their shirts and bras in a cold room, and then line up in order of breast size. This is mostly because what this did was reinforce insecurities that the girls were probably already saying to themselves. The older "sisters" would then make fun of them and play mental games with their vulnerable and helpless victims.

Paddling is what some may think a classic. Though it’s what’s most commonly associated with the ancient tradition of hazing. Paddling sounds funny, but is still one of the worst. In fact, many have gone to the hospital with severe bodily injuries due to the violent act. This infliction of harm upon each other is often meant to strengthen the bonds between the victim and group (don’t ask how that works), but often it’s just plain harm. One girl reported to The Star-Ledger that she was told the beatings would "humble" her and build love and trust between the sorority sisters. However, after seven nights of beatings and being struck a total of 201 times, the pledge went to the hospital because she was no longer able to sit due to the blood clots and welts all over her buttocks. Another paddling incident that resulted in the victim in a hospital took place in 2007. Two Florida A&M fraternity brothers were given two years in prison for paddling a pledge with wooden canes. One of the Kappa Alpha Psi members was paddling the pledge while the other member was an encourager (in the grimmest sense), urging the pledge to take the paddling and reviving him when he passed out. Aw, what a good brother.

When somebody goes to college and dies from a water overdose, you know they’ve really missed out on the whole college experience. This is exactly what happens at a fraternity hazing ritual at the State University of New York. In March 2003, Walter Dean Jennings III was pledging Psi Epsilon Chi when he was forced to drink numerous pitchers of water, often to the point of vomiting. He ended up drinking so much that his brain swelled and he died from water intoxication. That’s right, there’s such a thing. 21 students were punished by the university and 13 were charged with crimes that included criminally negligent homicide. Another incident of water intoxication took place in 2005 at California State University Chico (the classiest of the CSUs). Matthew Carrington and a friend were pledging the Chi Tau fraternity when they were doused with gallons of cold water and powerful fans blew cold air on them. If that wasn’t enough, they were forced to do calisthenics while standing on one foot and drink several gallons of cold water. As any normal human being would do under such extreme conditions, Carrington collapsed. He unsurprisingly had hypothermia and brain swelling from water intoxication, and died two hours later. Oh, and this was during the Winter semester. After all was said and done, no need to worry as the cold-hearted "brothers" were brought to justice.

Adam Marszal and Russell Taylor, two former students at California Polytechnic State University, were sentenced to jail after hazing a freshman who died of alcohol poisoning while pledging Sigma Alpha Epsilon. The boy, 18, died after drinking large amounts of alcohol in 90 minutes. There was no afterparty. The boy, at his time of death, had a Blood Alcohol Level of .44. Just to put it into perspective, that is more than 5 times the legal limit for driving and actually exceeds the levels of the effects of surgical anesthesia.

2. Exercises in Feces and Urine

There’s nothing that says brotherly love more than feces and urine. Although it is said that many frats force their pledges to drink urine, few documented examples beyond just hearsay have surfaced with discreet details (at least as far as college hazing rituals go… military hazing rituals are a whole OTHER can of worms). An incident took place at Hartwick College where pledges of Alpha Chi Ro were forced to carry feces-covered rocks through a forest and do push-ups and up downs in urine-soaked garbage. It’s worse than it sounds. The garbage also contained glass and dirty diapers. The basement was in the house of Peter Torabkhan, who along with two other guys were charged by state police at Oneonta with first-degree hazing (a criminal offense nowadays). Another man, Yury Pertsovsky, who was not a student at Hartwick, was also charged with second-degree aggravated harassment for making threatening phone calls to the freshman who reported the incident.

This is a vintage piece with about as much panache as any modern-day hazing ritual. In 1959, the pledges of Kappa Sigma had to swallow pieces of raw liver (each as big as a club sandwich) soaked in oil without chewing. Richard Swanson was not successful in swallowing the liver and after his fourth try, the liver lodged in his throat forcing him to be taken to the hospital. The attendant in the ambulance, however, did not know about the liver and Swanson died at the hospital less than two hours after he began choking. I repeat: two hours of choking. Needless to say this liver-swallowing is not so widely practiced anymore; instead people just stick to ruining theirs.

As fraternity and sorority hazing continues at colleges across the county, young students are susceptible to going overboard in an effort to initiate pledges into their organizations.  If you find yourself facing criminal charges arising out of a hazing incident, call Nemann Law Offices immediately to protect your rights, and shield you from an increasingly vigorous prosecution.