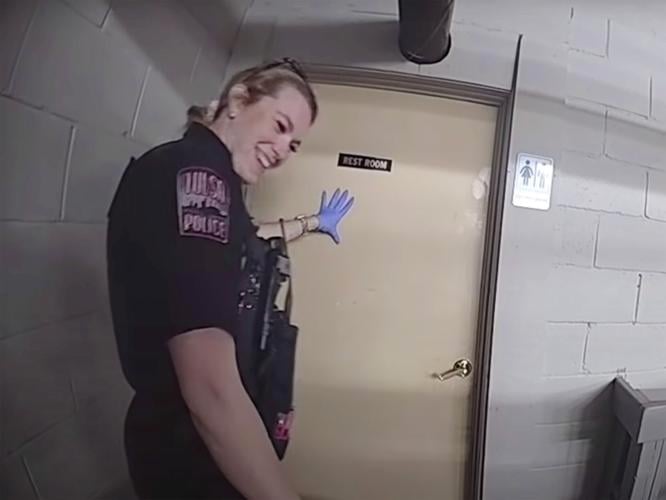 Edited body cam footage posted on Facebook on Monday night shows a Tulsa police officer rattling a locked door and laughing as she attempts to persuade a 70-year-old woman to come out of a restroom she has locked herself in.

“She is mental as all …,” the officer says, referring to the woman inside.

The officer can be heard saying, “This is going to be so fun,” before another officer is seen knocking the door down to take LaDonna June Paris into custody.

Paris is bipolar and was having a manic episode, according to the EMSA employee shown speaking to the officer.

“We couldn’t make her do anything, so we called you guys for assistance, and then she just took off,” the EMSA employee tells officers.

The incident occurred on Oct. 25 at the Habitat for Humanity ReStore at 1234 S. Norwood Ave., according to court records.

The YouTube video identifies the female officer as Ronni Corracia. Corracia is also listed as the arresting officer on the arrest and booking report.

Paris was charged on Oct. 28 with attempted arson, assault and battery upon a police officer, resisting an officer, trespassing and cruelty to animals. She was held in the Tulsa County jail for approximately a month before the case was dismissed on Nov. 23 “in the interest of justice and civil diversion.”

At one point in the video, Corracia can be seen talking to another officer as they wait for a third officer to assist with knocking down the door.

“I really hope it is (name unclear) because I really like the way he works,” Corracia says. “He is going to pound the door open and spray her.”

During another segment of the video, she taps the door with her fingertips to rattle it, laughs and says: “I love my job.”

The Tulsa Police Department issued a detailed statement about the incident Tuesday evening after the Tulsa World emailed questions regarding the incident.

“After 34 minutes of unsuccessful verbal coaxing, Paris still refused to open the door and surrender,” the statement says. “Officers forced entry into the small bathroom and quickly secured Paris with minimal force.

“When loading Paris into a vehicle, she kicked an officer.”

According to police, officers were called to ReStore by an employee of the business who said Paris had been there for four hours and had left a dog in the U-Haul in which she arrived. Police had hoped to have their Community Response Team, which includes mental health specialists, respond to the call, but no members of the team were available, police said.

“She tried to set the bathroom on fire; she had a lighter with like the (aerosol) spray. She had a lighter with the spray, like spraying at the door and at us, so she gets to go to jail now for probably arson, trespassing, obstruction — cause she wouldn’t leave — resisting, all that stuff.”

The police statement notes that officers made several attempts to secure Paris while having no knowledge of what she had with her on the other side of the door.

“After 33 minutes a third officer arrived on scene and (after) Paris still refused to exit the bathroom, the officers formulated a plan to enter the room and secure Paris,” according to the TPD statement. “While the use of OC (pepper) spray was discussed the officers chose to not use it and try to control Paris’ hands instead.”

The six-minute video was edited down from 90 minutes of body cam footage, according to police. The Tulsa World was unable to verify the source of the edited video.

The video ends with a female voice speaking from inside the Police Department or jail, where she can be heard saying: “If you are going to play stupid games, you are going to win stupid prizes. I’m just — I’m over it.”

The Tulsa World asked Mayor G.T. Bynum several questions about the incident Tuesday afternoon, many of which he did not respond to directly.

In an emailed response, he said the YouTube video was brought to his attention by TPD leadership as part of their investigation of the incident.

“It is heartbreaking to see a fellow Tulsan suffering a mental health crisis in a video, and it is a reminder of the difficult situations officers deal with in the field every day,” Bynum said. “I am confident in the investigation conducted by the Tulsa Police Department.”

In its statement, the Police Department said the officers’ overall actions and the way the call was handled were within the department’s policies.

“To be clear, the banter between the officers outside of the presence of the suspect can be (perceived) as unprofessional and has been addressed with the officers.”

The department said the video footage was originally released because an arrest had been made, though a judge later cited Paris’ mental health when dismissing the charges. The agency made public several full-length videos from the arrest after the edited footage got attention.

“Under normal circumstances, we would not release a video where no arrest was made, and someone was in a mental health crisis,” the statement reads.