THE NEED FOR A MARIJUANA BREATHALYZER 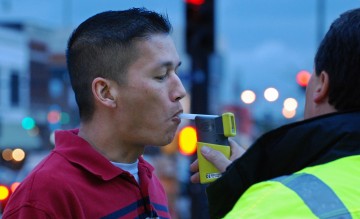 As of now, there are no methods to determine whether someone is immediately impaired by marijuana. In fact, Oregon does not even have a standard for what “impairment” means. That is causing problems for law enforcement, employers and other groups around the state that need definitive proof of a person’s state of mind.

Measure 91, which legalized recreational marijuana in the state, has brought along as many questions as it did answers.

“Right now, the problem is that we don’t have any information on what constitutes impairment,” Karen O’Connor, a lawyer who specializes in labor and employment statutes and represents many employers in Oregon, told GoLocal. “We don’t even have a way to measure impairment.”

Already, the subject of driving while high has reared its head. As GoLocal reported earlier this week, a pedestrian was struck and killed by a driver believed to be under the influence of marijuana.

Sgt. Peter Simpson, with the Portland Police Bureau, told GoLocal that currently, police use a combination of field sobriety tests and a blood test to see if a driver is under the influence of marijuana. He admitted, however, that this was an imperfect system, and said a “marijuana breathalyzer” would make officer’s jobs much easier.

“We’re concerned about people driving under the influence of marijuana, but it can be hard for us to monitor right now,” Simpson said. “An immediate test like a breathalyzer would allow us to police impaired driving like we do with alcohol and crack down on those who think it’s okay to drive while they're stoned. It would make the job much, much easier.”

Testing at the Workplace

O’Connor said that many employers are still exercising their right to test employees for drugs, including marijuana, as a condition of both hiring and employment. Part of the reason for that, she said, was because there is currently no way to distinguish marijuana from other drugs in the testing process.

“Right now if you have marijuana in your system, you’ll just test positive and probably have to deal with some consequences,” O’Connor said. “They’re still testing for all the reasons we saw in the past, mostly for safety and security reasons.”

However, if a more immediate test for marijuana impairment were available, it could change the landscape for employers and employees alive.

“Theoretically, I think it could have a big impact,” O’Connor said. “It would allow employers to see if their employees are impaired at work, or rather just consuming marijuana legally in their off-time. I don’t think most employers want to concern themselves with what their employees do after-hours if they can avoid it.”

Scientists and corporations are looking to develop ways to test for marijuana impairment more rapidly. At Washington State University, Herbert Hill and a team of chemists are working on a device that could detect marijuana in a person’s breath, and they’re not the only ones. Prototypes for similar devices have already been designed by companies like Cannabix Technologies and Lifeloc Technologies.

Despite the high demand for such a product, Hill told GoLocal that “we have a long way to go before we have a dependable test for THC.”

O’Connor agreed. “I think it’s going to take a while to get any reliable test,” O’Connor said. “It’s still illegal from a federal perspective, and most tests for products like this receive funding from the federal government, which isn’t coming anytime soon.”

Colorado and Washington, which have also legalized recreational marijuana, have set the standard for impairment at five nanograms of marijuana per millimeter in the bloodstream. However, that standard can only be determined with a blood test, which can produce positive results for marijuana even if the subject has not consumed any for weeks.

Oregon has no such standard yet. The Oregon Liquor Control Commission, which will be in charge for setting rules about recreational marijuana, is charged with determining a standard and detection method. They will give a presentation to the State Legislature in January with their recommendations.