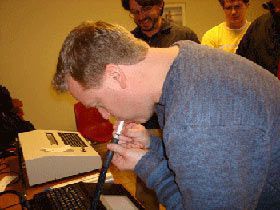 States show little interest in revisiting the hot-button issue, industry groups are lining up against the plan and even the most ardent foes of intoxicated drivers

– including Mothers Against Drunk Driving (MADD) and the Governors Highway Safety Association (GHSA) – have declined to endorse it.

In May, Hersman and the NTSB rolled out a series of recommendations meant to reduce the number of alcohol-impaired crashes in the U.S., including a bold call for all 50 states and the District of Columbia to lower the legal limit from .08 to .05.

Accompanied by a study finding the decrease would lead to a significant drop in U.S. traffic deaths, the proposal generated lots of attention this spring. But little, if any, action has taken place in the country’s state legislatures, which must approve laws lowering the limit.

"We don’t see any state going to .05," said Jonathan Adkins, deputy executive director for the governor’s safety group. "This doesn’t seem to be getting any traction."

GHSA, MADD and other groups have declined to take a formal position on the proposal, but have endorsed a range of anti-drunk driving measures including state laws that require breath-activated ignition interlocks for convicted offenders.

The groups’ campaign for that and other safety measures is predicated on enforcement of the .08 limit, and state-by-state consideration of more stringent blood alcohol levels could muddle the effort, the groups fear.

Without backing from the influential groups, states face less pressure to act. To date, none has taken up consideration of legislation in line with the NTSB recommendation.

Many state lawmakers recall the painstaking process of lowering the level to .08 from .10, which took more than two decades to accomplish nationwide.

State Rep. Terri Austin, an Indiana Democrat, said the federal argument to lower the limit would have to demonstrate clear, scientific evidence that the change is the best way to improve safety in order to convince the Hoosier State to act.

"I think legislators are going to want to have a pretty compelling case," Austin said.

A past chairwoman of the Transportation Committee in the Indiana House of Representatives who also sits on the National Conference of State Legislatures (NCSL), Austin said she has seen no legislative in response to the recommendation.

Similarly, there has been no action in California, often the first state to move on public protection issues.

The state has become accustomed to the .08 level, which in some cases is seen as too low, said lobbyist Ignacio Hernandez, who has worked on numerous drunk driving bills and lobbied on behalf of the California Attorneys for Criminal Justice.

"If anything, we see cases when someone is at point .08 and there are questions about whether their driving is impaired," said Hernandez, of the Hernandez Strategies Group. "It just doesn’t seem like there’s enough justification."

The NTSB points to studies showing that someone with a .08 level is roughly twice as likely to get into a wreck as someone with a level of .05. More than 100 countries have already established at or below .05, the safety board notes, adding that a person is killed, on average, every hour by a drunk driver and some 100,000 die every year in the United States.

Knudson said there he had heard of some level of interest in a variety of states, including Washington State, Illinois and Tennessee. But ultimately, he said, the NTSB doesn’t base its findings on political viability.

"We make recommendations based on what we think are the best things to do for safety" said Knudson. "We don’t predicate our recommendations on how likely they are to be adopted."

Even so, MADD, GHSA and other safety groups have embraced most of the NTSB’s 18 other recommendations, which include the interlock ignition initiative, immediate license suspensions for drunk drivers and bolstered programs to reduce recidivism.

But few got as much attention as the blood-alcohol proposal, which was panned by the hospitality and restaurant industries.

The American Beverage Institute, for instance, blasted the proposal, calling it a "ludicrous" plan that would criminalize responsible behavior.

Other groups were less bombastic. The National Restaurant Institute questioned whether the recommendation would substantially improve safety.

"We have reservations that the proposal calling for a lower blood alcohol content level would not impact the issue of excessive drinking in a significant way," said Sue Hensley, a spokeswoman for the association.

Other business groups echoed those sentiments, saying they are committed to tackling the problem through proven means, but were not ready to support another drop in the blood-alcohol limit.

"The NTSB recommendation goes beyond the science cited by public health and safety groups in the fight to eliminate drunk driving," said Rebecca Spicer, vice president of communications and public affairs for the National Beer Wholesalers Association.