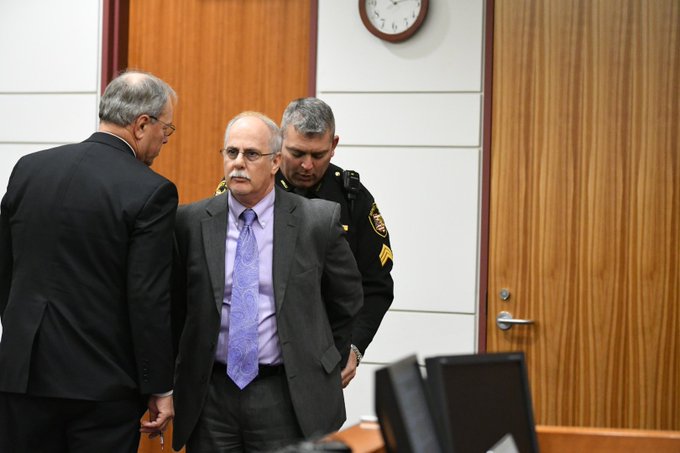 It was a routine visit to the lawyer’s office following her divorce.

The Shieffield Village, Ohio, woman visited the now 59-year-old Michael W. Fine, her lawyer, to discuss a custody issue. They chatted, and she paid him a $1,500 fee.

It was business as usual. At least, she thought it was.

When she left, though, she noticed that her bra was disheveled, and her vaginal area was wet, according to court documents. Upon further reflection, she realized her memory of everything that went on in the room was foggy.

The meeting blurred into a blank spot, which was odd — it wasn’t as if she’d been drinking alcohol or taking any medications.

It happened again and again, either at Fine’s office or the Lorain County Justice Center. She was confused, worried.

Eventually, she grew concerned enough that in September 2014, she reported it to the Sheffield Village Police Department.

That’s also when she began recording her meetings with Fine. After one particular meeting, she left with the same mysterious sensations but only remembered speaking about “legal matters,” according to court documents.

Then she played the tape back. On it was a “sexually charged discussion” between her and Fine, during which Fine said he will give her “the most amazing pleasure” and he would “build [her] towards a massive orgasm.” At one point, he said she was “soaking wet” and he was her “teacher and you are my student.”

“I can do it to you, with you all the time, can’t I,” he stated, according to court documents. “I am the only one who knows how to trigger it.”

“You’ll only recollect what we were talking about your case until we see each other tomorrow,” Fine concluded. “Do you understand?”

The woman remembered none of it. (The Washington Post does not publish names of victims of sexual abuse.)

She went back to the Sheffield Village Police Department, where officer Jose Soto listened to the tape and strongly suggested she cancel their next meeting.

Eventually, the Lorain County Prosecutor’s Office decided to have the woman wear a microphone and an oculus video recording device in a meeting with Fine. Almost immediately upon the meeting’s commencement, Fine “placed the woman into a trance.” Again, he began speaking in sexually explicit terms — many of them sounding like rules, such as “You are free to touch yourself,” or commands such as, “You are going to feel such attraction and arousal and excitement that you are going to demand that I touch you and you touch me.”

The video captured him rubbing her shoulder.

Things progressed no further, as police burst into the room.

Another woman, who will also remained unnamed, had a similar experience. During her first meeting with Fine, he made comments about her physical appearance. He also asked if her arms felt “weightless” and told her “to focus on his voice while he counted down from ten,” according to court documents.

The woman believed Fine was trying to hypnotize her.

That may well have been the case.

In one complaint filed against Fine, a victim described how he would perform the actual hypnosis. Under the guise of introducing her to “meditation” and “mindfulness,” he would ask her to sit in a chair, perform a few breathing exercises and close her eyes. Sometimes, he would ask her to watch the space between his fingers.

Eventually the moments would simply slip away to nothingness.

It appeared that he did the same to his other victims, of which Fine had at least six, the Associated Press reported.

In September, he pleaded guilty to five counts of kidnapping and one count of attempted kidnapping. Each charge carried a sexual motivation specification, the Elyria Chronicle-Telegram reported. He admitted to using his familiarity with and dexterity in hypnosis to control six women, forcing them to tend to his sexual desires against their conscious will

On Monday, Fine was sentenced to 12 years in prison. Additionally, he was classified as a Tier 2 sexual offender, meaning he’ll have to register as a sex offender every 180 days for 25 years, according to the Chronicle-Telegram.

Last year, following the allegations, Fine, who had received his J.D. from the Cleveland-Marshall College of Law, agreed to permanent disbarment, according to the ABA Journal.

Added Cosgrove, “You deserve to be punished.”

Also at Monday’s sentencing, one of the women offered a victim impact statement.

“I went to Michael Fine with help in getting out of a terrible and abusive situation. I paid him to help me,” the statement read. “He used my trust and his position as my attorney to gain information about my vulnerabilities. He then used that information not only to protect and defend me, but also to manipulate, hurt and take advantage of me.”

It continued, “Is 12 years long enough? Is this enough time for the pain, hurt and suffering that I now have to live with? This will be a part of who I am to become. This is now part of my being — not by choice, but by circumstance. Twelve years compared to a lifetime — just doesn’t seem fair, does it?”

While the crime might sound unusual, this isn’t the first time hypnosis has been used to molest women.

In 2012, the AP noted, a physician assistant in Michigan was convicted of second-degree criminal sexual conduct after he hypnotized two women, then proceeded to sexually assault them.

In the scientific community, questions still abound concerning hypnosis. Still, as an article in the Scientific American Mind stated, the “study of hypnotic phenomena is now squarely in the domain of normal cognitive science.”

Literature from the American Psychological Association defined hypnosis as “a procedure during which a health professional or researcher suggests while treating someone, that he or she experience changes in sensations, perceptions, thoughts or behavior.”

There is some contradictory information regarding hypnosis, as it continues to be studied. Some, such as the APA, argue that, “contrary to some depictions of hypnosis in books, movies or television, people who have been hypnotized do not lose control over their behavior.”

An article in the Scientific American Mind, however, stated, “the subject does not experience hypnotically suggested behavior as something that is actively achieved. To the contrary, it is typically deemed as effortless — as something that just happens. People who have been hypnotized often say things like ‘My hand became heavy and moved down by itself.’”

Finally, the piece stated, “Using hypnosis, scientists have temporarily created hallucinations, compulsions, certain types of memory loss, false memories, and delusions in the laboratory so that these phenomena can be studied in a controlled environment.”

But, as the APA stated, perhaps most tellingly, “People respond to hypnosis in different ways.”

Regardless of what modern science understands of hypnosis, one thing is certain.

In her victim impact statement, one woman said, “He gets a 12-year sentence. I get a life sentence.”