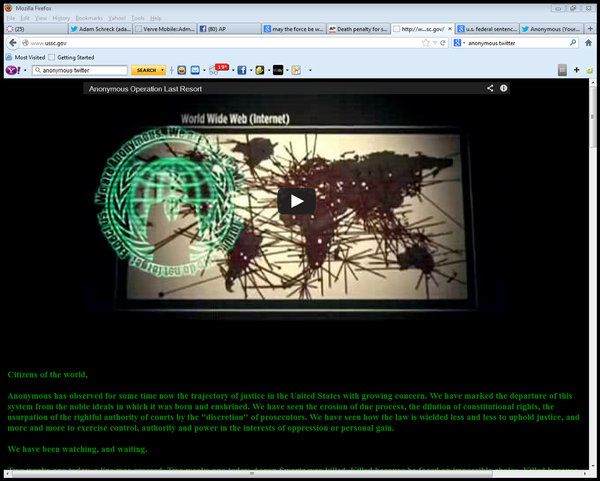 A collective of hackers known as Anonymous commandeered a Department of Justice website Saturday to protest what it called the harsh treatment by government prosecutors of Internet activist Aaron Swartz, who committed suicide this month.

The hackers replaced the site's content with a video denouncing the government and praising the 26-year-old co-founder of Reddit, who hanged himself two weeks ago as his trial date for allegedly hacking into an MIT computer network neared. Swartz, who was accused of illegally downloading academic articles, faced up to 30 years in prison.

Swartz had long promoted open access of information on the Web.

Anonymous said it deliberately hacked the U.S. Sentencing Commission’s website to call attention to "the federal sentencing guidelines which enable prosecutors to cheat citizens of their constitutionally-guaranteed right to a fair trial."

The FBI’s Criminal, Cyber, Response Services branch put out a statement Saturday: "We were aware as soon as it happened and are handling it as a criminal investigation. We are always concerned when someone illegally accesses another person's or government agency's network."

The almost 10-minute video declared that "a line was crossed" when Swartz, facing what Anonymous called "a twisted and distorted perversion of justice," decided to kill himself. The hackers decided they had to do something for Swartz, adding that "several more of our brethren now face similar disproportionate persecution."

As word of the hacking jolted around the Web, some saw an opportunity for advocacy. A tweet attributed only to "Anonymous" linked to Congress’ website and encouraged people to contact their representatives and ask them to support an evolving piece of legislation already known as "Aaron’s law."

Last week, Rep. Zoe Lofgren (D-Calif.) put a draft of a bill that would limit the scope of the Computer Fraud and Abuse Act, a 1986 law that prosecutors used to help lodge their case against Swartz.

Activists and Swartz’s family have publicly blamed Swartz’s suicide on the government. Last week, Bob Swartz, Aaron’s father, said he thinks his son "was hounded to his death by a system and a set of attorneys that still don’t understand the nature of what they did."

In another recent case, Anonymous leaked a video of people said to be from the Ohio high school where two football players face rape charges.