US SUPREME COURT: DOG SNIFF AT HOME'S FRONT DOOR IS A "SEARCH" REQUIRING PROBABLE CAUSE 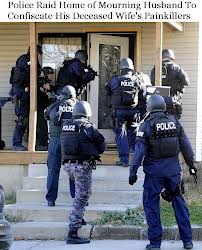 Police took a drug-sniffing dog to Jardines’ front porch, where the dog gave a positive alert for narcotics. Based on the alert, the officers obtained a warrant for a search, which revealed marijuana plants; Jardines was charged with trafficking in cannabis. The Supreme Court of Florida approved the trial court’s decision to suppress the evidence, holding that the officers had engaged in a Fourth Amendment search unsupported by probable cause...

The government's use of trained police dogs to investigate the home and its immediate surroundings is a"search" within the meaning of the Fourth Amendment.  The Judgement if the Supreme Court of Florida is therefore affirmed.

Read More About US SUPREME COURT: DOG SNIFF AT HOME'S FRONT DOOR IS A "SEARCH" REQUIRING PROBABLE CAUSE...