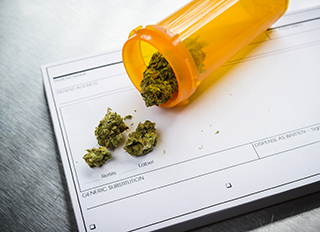 A forensic scientist allegedly seen “dry labbing” a suspected marijuana sample in December has been suspended, as prosecutors and defense attorneys consider thousands of other cases in which he handled evidence.

Kamal Shah of the New Jersey State Police Office of Forensic Science worked as a drug analyst from 2005 to 2015, and handled 7,827 cases, according to the New Jersey Office of the Attorney General.

According to state documents, he wrote “test results” for suspected marijuana, without actually performing tests. The alleged problem was discovered on Dec. 10, 2015, authorities said.

Shah was suspended without pay effective Jan. 12, according to state authorities.

The allegations were first enumerated in a Feb. 22 letter from Elie Honig, the director of the state’s division of criminal justice, to all 21 county prosecutors in New Jersey.

The state office of the public defender is determining whether Shah’s cases need review. Some 2,100 alone were found in Passaic County, according to a letter sent Monday by Judy Fallon, a deputy public defender.

“The prosecutor’s office is still in the process of identifying them. Their plan is to submit for retesting specimens from open cases,” Fallon wrote. “The larger, and unanswered, question is how this impacts already resolved cases, especially those where the specimens may have been destroyed.”

The state police are working with the county prosecutors to address cases and potential issues, said the AG’s office.

“There was only one instance when Shah was observed improperly conducting a test,” said Peter Aseltine, spokesman for the AG’s office. “However, in an abundance of caution, we have identified every case that Shah worked on since he began working in the North Regional Lab Drug Unit in 2005, and we have notified the county prosecutors, advising them to alert defense attorneys in those cases.”

Shah was originally hired in 1989 by the state police, but worked in the equine laboratory prior to moving over to the drug unit in Little Falls in 2005.

The new allegations in New Jersey have been made against forensic scientists in similar roles in other states.

A Massachusetts forensic chemist named Annie Dookhan pleaded guilty to tampering with evidence in 2013 and was sentenced to 3 to 5 years in prison, in connection with “dry labbing” years’ worth of drug samples. The Commonwealth began undertaking a massive review of 40,000 cases she handled last year.

A similar series of allegations of falsified results at a state lab in Oregon led to the suspension of an analyst last September.