You Have the Right to Film Cops- For Now 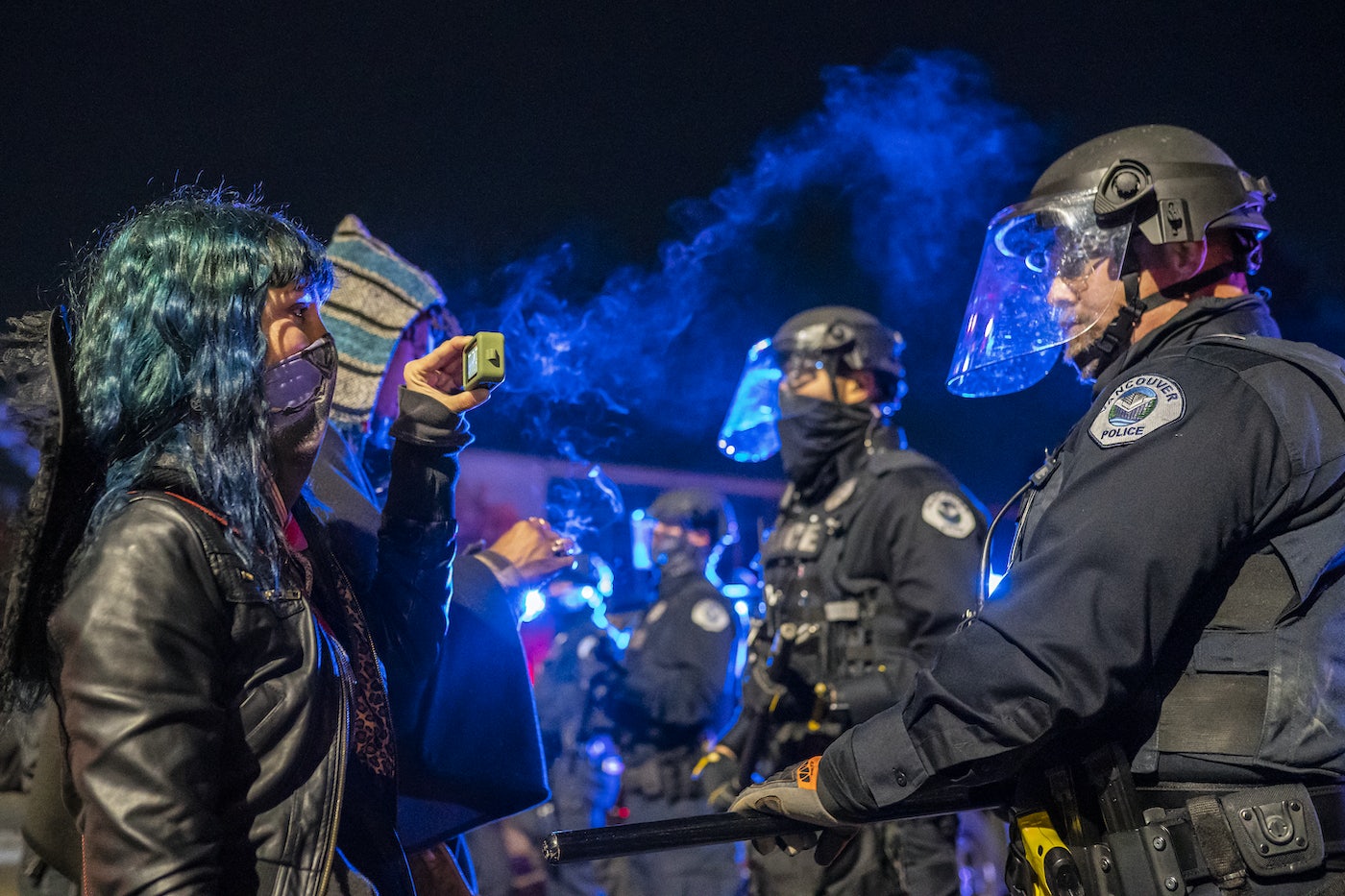 The Supreme Court receives thousands of requests each term to review lower-court decisions. The justices typically agree to consider only a few dozen of them in full. Most of the time, these cases are selected to resolve one specific question of law at a time—a question that’s often of significant public interest, serious legal interest, or both. A pending petition out of Colorado, however, gives the justices a two-for-one shot on vital legal issues: the First Amendment right to film the police, as well as when, and how, the police should receive qualified immunity in civil rights lawsuits.

The case, Frasier v. Evans, centers on a 2014 encounter between Levi Frasier and officers in the Denver Police Department. According to court filings, Frasier watched as a Denver police detective tried to bust what the detective suspected was an illegal drug sale. At one point, when the detective was struggling to pull a sock, purportedly containing drugs, out of the suspect’s mouth, he asked Frasier to come over and help him. Before Frasier could assist him, however, other officers arrived to help. Frasier then began filming the scene on his tablet.

What he caught on his device’s camera was chaos. One of the officers struck the suspect in the face multiple times. The suspect’s girlfriend, who was more than seven months pregnant, approached the scuffle while shouting at the cops. Another officer grabbed her by the ankle and yanked, knocking her face-forward onto the ground. Then an officer, apparently having noticed that Frasier was filming the whole contretemps, shouted, “Camera!” As Frasier returned to his car, an officer beckoned him to come over to the police car and bring his license and the tablet with him. Frasier, fearful that the cops would delete the footage, only brought his license. When they asked for the camera, he brought his phone back, but they recognized it wasn’t the same device.

“At that point, all five of the officers encircled [Frasier] and demanded the video,” he told the court in his petition. Believing he would be taken to jail if he refused any longer, Frasier retrieved his tablet. Officer Evans then “grabbed the tablet out of [Frasier’s] hands and began searching for the video of the arrest. [Frasier] objected that this was improper without a warrant, but Officer Evans continued to scan files on the tablet. He then announced to the other officers, ‘I don’t see the video in here. I can’t find it.’ Another officer responded, ‘As long as there’s no video, it’s OK.... If there’s just a photo, that’s fine, as long as there’s no video.’” The officers then gave Frasier back his tablet and his driver’s license, and he left. He later provided the footage to a local news outlet.

Frasier then sued the officers and the city in federal court for violating his First Amendment rights by retaliating against him for filming the incident. He noted that the city had trained its officers since at least 2007 to recognize that citizens have the right to film them while they are on duty. In addition to this policy, the Denver Police Department had two separate training courses that explicitly stated that the First Amendment protects members of the public while they film police officers in public. Accordingly, a federal district court judge rejected the officers’ motion to dismiss Frasier’s First Amendment claim and denied them qualified immunity.

Though it was once a fairly obscure aspect of the American legal system, qualified immunity became increasingly well known over the past few years thanks to the work of police-reform activists. (I wrote about its history and recent developments at greater length in 2018.) Some civil servants—typically legislators, judges, and prosecutors—enjoy absolute immunity from personal lawsuits for their on-the-job actions. Under Supreme Court precedents, other civil servants have what’s known as qualified immunity. Generally speaking, it means they can’t be sued for violating someone’s rights unless it violated a “clearly established” law or right at the time. For obvious reasons, this comes up most often in policing-related disputes.

Earlier this year, the Tenth Circuit Court of Appeals overturned the lower-court ruling and concluded that qualified immunity protected the officers’ actions. The three-judge panel’s decision is unerringly good at highlighting why the justices should weigh in. First, and perhaps most importantly, it muddies the waters on what counts as “clearly established” in qualified-immunity cases. The lower court had reasonably concluded that since the officers had been trained to recognize there was a First Amendment right to film the police, they should have respected it.

The Tenth Circuit disagreed. The panel concluded that departmental policies could not be used to establish whether a cop was violating a “clearly established” law or right because those policies were not, in fact, the law. “Judicial decisions are the only valid interpretive source of the content of clearly established law, and, consequently, whatever training the officers received concerning the nature of Mr. Frasier’s First Amendment rights was irrelevant to the clearly-established-law inquiry,” the panel concluded. Under this reasoning, police officers aren’t expected to rely on their departmental training to figure out when they’re crossing a constitutional line. They must instead constantly stay up to date on federal court rulings, even though they are not themselves lawyers.

The Supreme Court has not explicitly stated that there is a First Amendment right to film the police. But most federal courts that have considered the issue have concluded that such a right exists. According to the Electronic Frontier Foundation, the First, Third, Fifth, Seventh, Ninth, and Eleventh Circuits have ruled accordingly. (It appears to be coincidental that only odd-numbered circuit courts have done so.) Since the Tenth Circuit had not previously established such a right, the panel concluded that qualified immunity applied to the officers here, even though their departments had explicitly told them otherwise.

Here’s where the qualified-immunity jurisprudence really goes off the rails. At one point, courts would follow a two-step process: First, did such a right exist? Second, was that right clearly established at the time? Then, in its 2009 decision in Pearson v. Callahan, the Supreme Court unanimously ruled that the two-step process was no longer mandatory, freeing the lower courts to decide the factors in whatever order they chose. Unsurprisingly, more than a few courts opted to simply figure out whether something was clearly established at the time rather than rule upon the deeper constitutional question. The result, as critics like Judge Don Willett have observed, is not just “constitutional stagnation,” but a catch-22 process where some rights never get clearly established by federal courts at all.

That’s what the Tenth Circuit opted to do in this case. “We do not consider, nor opine on, whether Mr. Frasier actually had a First Amendment right to record the police performing their official duties in public spaces,” the panel concluded. “We exercise our discretion to bypass the constitutional question of whether such right even exists. In doing so, we are influenced by the fact that neither party disputed that such a right exists (nor did the district court question its existence). And because we ultimately determine that any First Amendment right that Mr. Frasier had to record the officers was not clearly established at the time he did so, we see no reason to risk the possibility of ‘glibly announc[ing] new constitutional rights in dictum that will have no effect whatsoever on the case.’”

So, here’s the end result if the Tenth Circuit’s decision stands: Since the panel ruled that filming the police wasn’t a clearly established right when Frasier did it in 2014, the officers in that encounter will receive qualified immunity and defeat Frasier’s civil rights lawsuit. And because the Tenth Circuit declined to “clearly establish” such a right in this case—thanks to the officers’ litigation tactic to not dispute its existence—other Denver police officers could violate other Coloradans’ First Amendment right to film them, and then claim qualified immunity again if they’re sued for it. Constitutional stagnation indeed.Frasier urged the court to reassess how lower courts determine whether something is “clearly established” and overturn the Tenth Circuit’s narrow interpretation of it. “The qualified-immunity doctrine was created to prevent officers from being held unexpectedly liable based on constitutional rules they ‘neither knew nor should have known’ existed,” he told the court, quoting a 1982 Supreme Court case. “The officers here all testified that they knew they were violating [Frasier’s] rights. Their training, department policies, and precedent all underscored that reality. Whatever the outer boundaries of qualified immunity may be, this case is far beyond them.”

A coalition of news organizations and press-freedom groups also urgedthe Supreme Court to take up this case to decide the First Amendment question, as did Frasier. “For the right to record police to be meaningful, then, a sufficient deterrent must be in place to ensure that right is not infringed in the first instance,” they argued in a friend-of-the-court brief. “An injunction cannot restore footage that a reporter never had the chance to take. Other remedial avenues are often closed as well; for one, officers who retaliate against press coverage—even through the use of unwarranted force—virtually never face prosecution for doing so. And internal discipline, too, is regrettably rare.” Only the reasonable fear of litigation, they argued, will be enough to deter them.

Will the justices take the opportunity? As I’ve noted before, at least two of the court’s members, Justices Clarence Thomas and Sonia Sotomayor, have urged the court to reconsider its approach to qualified immunity. But their colleagues have not yet moved in their direction. With Congress apparently at an impasse at fixing the qualified-immunity problem in negotiations over a police-reform bill, the courts are the only likely vehicle to address a problem that the courts themselves created.Even if the justices aren’t willing to allow cameras in the Supreme Court, they should be willing to allow them to be used to document potential police misconduct. The First Amendment is clear even if the court’s qualified-immunity decisions are not.