If you are pulled over in one of five Michigan counties and a police officer believes you're impaired by drugs, you could be asked to submit your saliva to be tested.

Drug Recognition Experts (DREs), with specialized training in the signs of drug impairment, will carry handheld devices to test for the presence of drugs in drivers' saliva.

"They're not going to be randomly pulling people over, they have to have a valid reason," he said. "They're going to be looking for things like weaving in their lane, driving too fast, driving too slow, not using your turn signals -- indicators that would indicate that somebody's driving while impaired."

After making a traffic stop, police would still have to establish probable cause for impairment, he said, by performing field sobriety tests.

"The only difference with the pilot program is if they determine they're impaired on some type of drug, they're going to ask them to submit to the oral fluid swab," Flegel said. 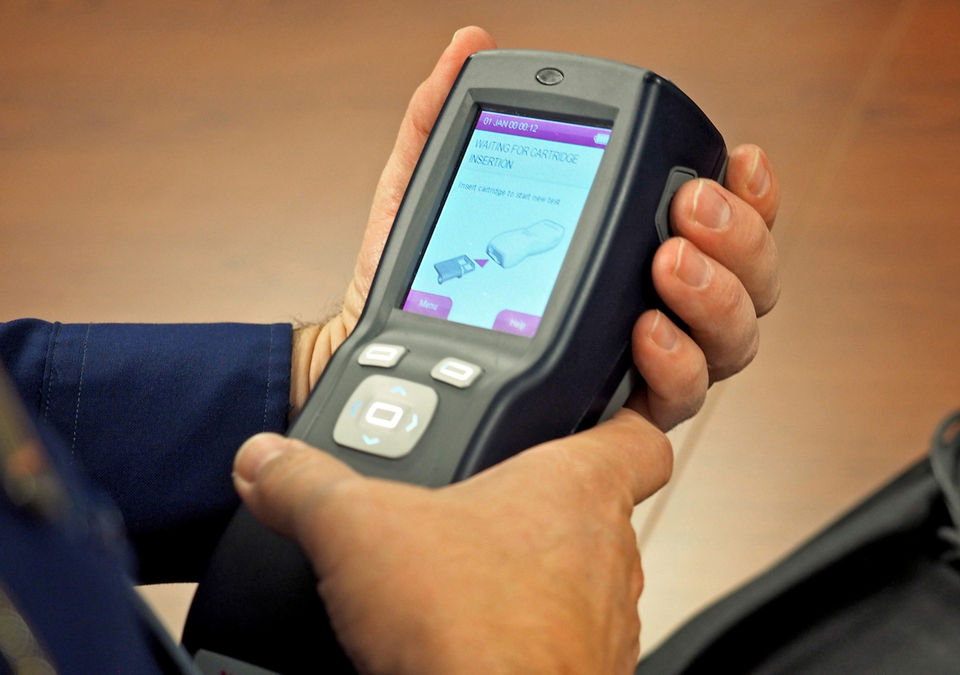 The device will record results based on threshold limits of nanograms per milliliter set by the manufacturer for six substances:

MSP said it should be noted that thresholds for saliva testing are different than thresholds used for blood testing.

The testing limits are set for two reasons, to ensure recent drug intake can be detected, and to ensure the device performs reliably, according to the manufacturer.

Each of 26 Drug Recognition Experts, working for a dozen police agencies within the five counties, will carry the devices. Agencies with DRE officers in the pilot program are:

DREs will be the only officers to administer the test, according to the MSP.

Abbott acquired Alere, the manufacturer of the handheld device, on Oct. 3, 2017.

The handheld device is lightweight, portable and compact "with a full color screen, readable day and night," according to the manufacturer's website. The device is advertised as being easy to use and less invasive than urine or blood sampling, the company said, and the collection process limits adulteration and tampering concerns.

"Abbott is pleased to provide the Michigan State Police with a testing instrument that can be used at the roadside," said Scott Taillie, vice president, toxicology at Abbott.

A specialized swab that tells officers when there is enough saliva on it to be tested collects saliva from the inside of the mouth of the driver suspected of impairment, police said.

The swab is inserted into the bottom of the device and it takes about five minutes to display on the screen a positive or negative result for the presence of drugs, Flegel said.

Asked about impairment of drivers who are taking a prescribed medication or possess a Michigan medical marijuana card, Flegel said those substances can still cause impaired driving.

"With either one, you can't be impaired while driving a vehicle, whether it's prescription or not," he said. "DREs are specially trained on how to deal with that."

He noted that the saliva test will only tell police if the drug is present or not, but it doesn't determine impairment.

The pilot program was established by the Michigan Legislature, under Public Acts 242 and 243 of 2016.

Since the pilot program was announced last week, people have shared their opinions online, with some happy to see changes meant to adress drugged driving, and others critical of the idea.

Attorney Neil Rockind of Rockind Law in Bloomfiled Hills has been a vocal critic of roadside drug testing since the issue was still being debated in the Legislature.

"The legal system and law enforcement wants it to be fast and perfect," he told MLive as the five counties were announced last week. "Science is not fast. Developing scientific techniques and perfecting those techniques typically takes years and years, and science is never perfect."

After the one-year pilot program, a report will be generated, MSP said.

"Because this is a pilot program, we want to make sure everything is accurate," Flegel said. "We're using this instrument and comparing blood results so we can show the accuracy and reliability of the device."

"We hope to lower that number and educate the public about not getting behind the wheel while on drugs," Flegel said. "We need to get the word out there so that doesn't happen."