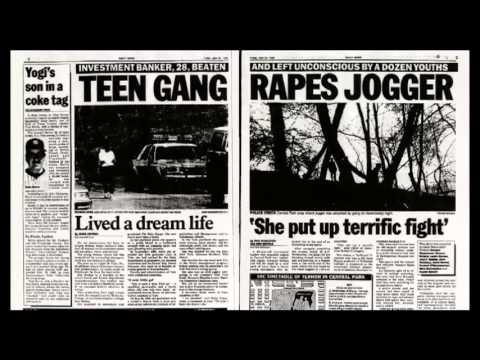 On the night of April 19, 1989, a 28-year-old female jogger was brutally attacked and raped in New York’s Central Park. She was found unconscious with her skull fractured, her body temperature at 84 degrees, and 75 percent of her blood drained from her body. When she recovered, she had no memory of the assault. Initial police investigations quickly focused on a group of African American and Latino youths who were in police custody for a series of other attacks perpetrated in the park that night.

After prolonged periods of police interrogation, five teenagers - Yusef Salaam, Kevin Richardson, Antron McCray, Raymond Santana and Korey Wise - confessed to being involved in the attacks. At the time, the defendants were between 14 and 16 years of age. Richardson, McCray, Sanatana, and Wise all gave videotaped confessions.

The Trials and Convictions

The confessions were presented as evidence though they differed in the time, location, and their description of the participants of the rape. At trial, the prosecutors also presented forensic evidence. A forensic analyst testified that a hair found on the victim was "similar" to Richardson’s hair "to a reasonable degree of scientific certainty." Because there is not adequate empirical data on the frequency of various class characteristics in human hair, an analyst’s assertion that hairs are similar is inherently prejudicial and lacks probative value. Also presented as evidence was a rock found near the scene of the crime that had blood and hair on it; evidence that was believed to have come from the victim.

The following year, all five teenagers were convicted, in two separate trials, of charges stemming from the attack. Then 16 years old, Korey Wise, was tried as an adult and convicted of assault, sexual abuse, and riot. He was sentenced to five to fifteen years.

In early 2002, Matias Reyes, a convicted murderer and rapist, admitted that he alone was responsible for the attack on the Central Park jogger. Reyes had already committed another rape near Central Park days earlier in 1989, using the same modus operandi. The victim of that rape had described the rapist as having fresh stitches in his chin and an investigator quickly linked Reyes to this description. Although the police had Reyes’s name on file, they failed to connect Reyes to the rape and assault of the Central Park jogger.

Eventually, the evidence from the crime was subjected to DNA testing. The DNA profile obtained from the spermatozoa found in the rape kit matched the profile of Reyes. Mitochondrial DNA testing on the hairs found on one of the defendants revealed that the hairs were not related to the victim or the crime. Further testing on hairs found on the victim also matched Reyes. Neither blood nor the hair found on a rock near the crime scene matched the victim. The evidence corroborated Reyes’s confession to the crime and is consistent with the other crimes committed by Reyes. He is currently serving a life sentence for those crimes.

On December 19, 2002, on the recommendation of the Manhattan District Attorney, the convictions of the five men were overturned. Wise served 11.5 years in prison for crimes he did not commit.

The investigation of the convictions of these five teenagers has raised questions regarding police coercion and false confessions, as well as the vulnerability of juveniles during police interrogations.