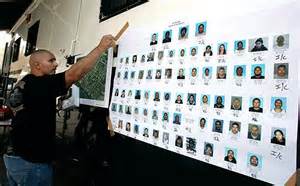 Three public officials in Charlotte were placed under police protection last month after the FBI discovered their photographs in the cell of an inmate believed to be tied to gangs.

The unusual security given to two judges and the Charlotte city attorney follows instances of brazen gang violence in the Carolinas, including the November killing of a city councilman in Chester, S.C., and the kidnapping of the father of a Raleigh-area prosecutor last spring.

A prosecutor in open court this month linked Jamell Cureton, the inmate whose cell was searched, to a broader investigation into the killings of a Lake Wylie couple, who were gunned down at their home last year.

On Jan. 12, federal agents led a raid of the Mecklenburg jail cell of Cureton, one of three men charged in the attempted robbery last May of a South Boulevard mattress store owned by Doug and Debbie London.

Doug London shot Cureton during the confrontation. Five months later, the Londons were killed after opening their door on a quiet Thursday evening.

Contacted late last week, the FBI declined to comment on the raid on Cureton’s cell, and details of what was found and seized remain under court seal.

Federal authorities and Charlotte-Mecklenburg police considered the situation "a low-level security threat," sources say. For about a week, teams of U.S. marshals spent the night parked in Whitney’s driveway. CMPD patrol officers made regular checks on the streets near Boner’s and Hagemann’s homes.

Whitney, Boner and Hagemann acknowledged being placed under protective watch, but they declined to talk about the situation for the record.

The FBI, CMPD spokesman Rob Tufano and U.S. Marshal Kelly Nesbit all declined to discuss the situation or to say whether the protective measures are still in place.

Tufano and FBI spokeswoman Shelley Lynch also refused to discuss the level of possible gang involvement tied to the robbery and killings.

According to court and government documents, UBN runs a sprawling East Coast criminal organization with deep ties to Charlotte and surrounding counties. Over the past five years, area UBN members have been the targets of several major crackdowns by the FBI and local law enforcement. Dozens have been sent to prison.

A national gang expert said UBN and other gangs have begun making more blatant threats against judges, prosecutors, police and trial witnesses. Last year, an imprisoned UBN leader arranged the kidnapping of the father of a Wake County prosecutor who had helped convict him.

When asked whether Cureton is a UBN member, Chiege Okwara, his court-appointed attorney, said, "I have no idea." She said she also does not know what was taken from his cell.

About two weeks after the jail search, authorities charged a Charlotte man and a Concord woman with killing the Londons.

As city attorney, Hagemann typically has little to do with criminal cases. Both Whitney and Boner, however, have handled noteworthy prosecutions involving UBN members.

Whitney, a former federal prosecutor, was the presiding judge in a sweeping federal crackdown that targeted UBN operatives in Charlotte, Gastonia and as far away as New York. The indictments charged suspects with crimes ranging from racketeering, trafficking in cocaine and firearms, and conspiracy to commit murder.

From 2013 through last October, Whitney sent 28 reputed UBN members, including one of the gang’s national leaders, to prison for as long as 30 years.

Whitney also handled the prosecution of more than a dozen suspected UBN members accused in 2009 of running drugs and weapons in the Beatties Ford Road corridor of west Charlotte.

Last year, Whitney was the judge of record when federal charges stemming from the attempted mattress store robbery were filed against Cureton, Adoma and Fudge.

However, the case was reassigned to U.S. District Judge Max Cogburn on Feb. 3. Federal documents don’t say why, but the change to a new judge took place shortly after Whitney was placed under protective surveillance.

Boner, who retired Jan. 1, handled a second-degree murder trial two years ago of a reputed UBN member who, at age 15, was charged with the fatal shooting of a truck driver during the robbery of a Charlotte service station.

In a December interview, Boner recalled that a key witness in the case did not show up to testify. The judge had the witness arrested and brought before him. The man said he had been sitting in his car at a red light on Freedom Drive the weekend before the trial began when someone walked up to his open window, put a gun to his head, and told him he wouldn’t be testifying.

When the jury later convicted the teenage defendant, "I gave him every day I could," Boner said, "because I considered him dangerous and capable of killing again."

Early last year, Boner also presided over the trial of Rashawn Mackey, a suspected UBN member convicted of murdering a robbery victim two years earlier. A jailhouse witness testified that Mackey wanted some of the prosecution witnesses executed and that he arranged for gang members to fill up the courtroom, Boner said.

After jurors reached their verdict, Boner said they sent him a note, asking whether they should be concerned for their safety. At the jury’s request, the judge never said anything about the note in court. But he said he ordered deputies to provide an armed escort for the jurors when they left the courthouse.

UBN is the East Coast arm of the older and better-known Bloods, which started in California. UBN was founded in 1993 by two inmates in New York’s Rikers Island prison to protect African-American inmates from established Latino gangs.

Federal documents say the gang spread south through the prison system and through the drug and gun trade, taking root in the Southeast around the turn of the century. According to a Justice Department profile of the gang, North Carolina has long been a key distribution center for UBN cocaine and marijuana shipments out of New York.

The gang is characterized by its hierarchical organization, in which a national council retains authority over dozens of local "cells." In the Charlotte area, the UBN cell is known as "G-Shine," which originally organized in New York, court documents show.

Experts say UBN is also set apart by the level of violence members appear willing to use, even compared with other gangs.

"Now we know what they’re capable of," he said, adding that the protection ordered for the three officials in Charlotte was the "prudent" thing to do, given that UBN and other gangs have begun acting with "greater boldness, greater audacity" in their threats against police and court officials.

In November, veteran Chester City Councilman Odell Williams, a former police officer and longtime businessman, was shot in the head as he drove near his home. Five suspected gang members are charged with his murder. They are likely tied to the Roundtree Circle gang, a local group without known ties to the UBN.

Okwara has said previously that her client could not have killed the Londons because he was in jail at the time of their deaths.

• Documents filed in connection with the 2012 UBN indictments in Charlotte indicate that both the gang’s North Carolina leader and one of its national council members in New York gave orders and helped direct day-to-day operations for their organizations while in prison.

"What’s even more compelling to this court is that you still were able to perform your duties as the leader of G-Shine ... while you were in prison," Whitney told Daryl "OG Powerful" Wilkinson last August, according to court transcripts.

"It is troubling for this court that incarceration did not stop you."

Wilkinson was serving a prison sentence in New York for murder when he was indicted on racketeering charges in Charlotte. Whitney gave him four years in federal prison, which will begin when Wilkinson completes his murder term.

• In 2013, a federal jury in Charlotte convicted four UBN members, who were state inmates at the time, of plotting to kill another prisoner and discussing assaults on the family members of other inmates who had disrespected them. Prosecutors say the four also used smuggled cellphones to conduct other gang business outside the prison.

• An imprisoned UBN leader also was at the center of one of the boldest and most frightening gang-related crimes of 2014. Prosecutors say gang leader Kelvin Melton ordered and micro-managed the kidnapping of the father of the Wake County assistant district attorney who had sent him to prison in 2012. The father was found and freed, but the case put prosecutors around the country on guard for potential threats to themselves and their loved ones.

Melton, who was serving a life sentence in Polk Correctional Institution in Butner at the time, used a contraband cellphone to hire the kidnappers, then sent more than 100 texts to convey orders as the kidnapping unfolded.

In another case, the FBI warned police chiefs around the state that UBN members might be targeting police officers after a gang member, who had wounded a sheriff’s deputy three days before, was shot to death outside Wilmington in October 2013. UBN members, an FBI memo said, were "committed to engage in shootings" in Wilmington.

According to officials and court documents, UBN has become a prominent part of many North Carolina prisons. Those sources say members control the inmate sale of contraband, organize attacks on rival gangs and, in a surprising number of cases, operate with the cooperation of prison guards.

In 2013, while testifying at the trial of four UBN defendants arrested in the 2012 sweep of gang operations in Charlotte and Gastonia, a prison captain from the state’s Bertie Correctional Institution told Whitney that gang members routinely compromised the staff at the high-security prison.

"Any gang in particular?" Demetrius Clark was asked, according to a transcript of his testimony.

"What kind of pressure?" an assistant U.S. attorney asked.

Read More About DISCOVERY IN INMATE'S CELL LEADS TO POLICE PROTECTION FOR PROSECUTOR AND JUDGES...