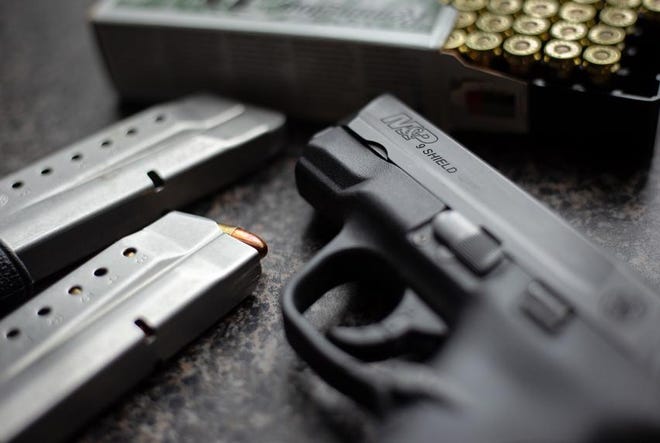 Researchers have found that states with permitless carry laws have experienced an 11 percent increase in handgun homicide rates after enactment.

Republicans in both chambers of the General Assembly passed legislation last Wednesday removing all permitting, training and background check requirements to carry a concealed weapon in Ohio.

The bill, Senate Bill 215, now goes to Gov. Mike DeWine, who can sign it into law or veto the legislation. There was a time a few years ago when DeWine was in favor of what he deemed to be sensible gun laws. But given how thoroughly he has capitulated to the right wing of his party on, basically, everything, you can bet your sweet bippy he'll sign it. S.B. 215 will be Ohio law very soon.

Permitless carry laws — backers of which call them "Constitutional carry" laws to make them seem rooted in history as opposed to 21st century gun lobby dominance of the Republican party — give anyone who is able to own a gun the right to carry a concealed weapon. You will still be required to get a license if you want to drive a car, go fishing, or cut someone's hair. But you will not need one in order to put a semiautomatic pistol in your coat pocket when walking the dog, doing the grocery shopping or attending a football game.

Republican sponsors of the legislation have characterized it as a deeply important philosophical issue, aimed at enshrining and protecting the right to bear arms granted under the U.S. Constitution and shielding gun owners from "intrusive government overreach." One Republican senator, Terry Johnson, cast the soon-to-be law as a matter of, well, fun, saying that it "makes it so you will be able to better enjoy your Second Amendment right." Whee!

How deep a philosophical matter this truly is for lawmakers is an open question, however, given that leading speeches from the floor of the General Assembly on the matter were not written by lawmakers, but rather by a gun industry lobbyist named Chris Dorr, who is the executive director of Ohio Gun Owners.

Dorr was outed by Ohio Capital Journal as the author of speeches given by the sponsors of the House bill when metadata attached to a copy of their testimony on the legislature’s website showed Dorr's name as the author of the document from which they read. One of those sponsors, Republican Rep. Tom Brinkman, responded to the revelation by saying he didn't know who wrote it. "I have no idea who writes my testimony," he offered. "I never write my testimony. I never write my floor speeches. That’s what staff is for."

This suggests that S.B. 215, like most other things the Ohio General Assembly has done since Republicans have attained supermajorities, is a political act, as opposed to one of policy. The bill is something aimed at pleasing donors and lobbyists and signaling lawmakers' bonafides on easily demagogued issues as opposed to doing anything to help make the lives of Ohioans better. And make no mistake, the soon-to-be-enacted permitless carry law does absolutely nothing on that score. Indeed, it's all but guaranteed to make things worse.

As is the case in most places where permitless carry has been enacted, Ohio police forces have spoken out against this bill because it will make their jobs harder and more dangerous. If the plight of police is not high on your list of priorities, know that public health researchers have found that states with permitless carry laws have experienced an 11 percent increase in handgun homicide rates after their enactment. This comes on top of the 14 percent higher rate of violent crime that followed the adoption of concealed carry permitting system similar to the one Ohio currently has in place. As it is, gun deaths in Ohio increased by 66 percent between 2007 and 2021. Between the "stand your ground" law Ohio adopted midway through last year and this new law, those numbers are almost certain to get worse.

On the one side, then, there is data — data that those advocating for the elimination of any and all gun safety laws have long since stopped even attempting to refute because they realized that (a) they can't; and (b) they don't have to refute it because gerrymandering has caused most representatives to be immune to electoral consequences for basically anything they do. On the other side there is passion, albeit a passion that is outsourced to the lobbyist class.

Nowhere in that mix does there seem to be anything approaching a significant number of people actually asking for a law like S.B. 215 — a law that serves almost no one, a law that helps virtually nobody, a law that will cause a lot of people to get killed.