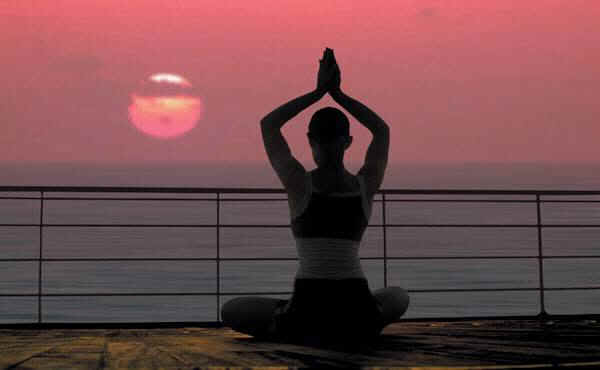 “Inhale. Exhale. Peekaboo!” Ms. Bergeron said from the front of the class. “Now, warrior pose. I am strong! I am brave!”

Though the yoga class had a notably calming effect on the children, things were far from placid outside the gymnasium.

A small but vocal group of parents, spurred on by the head of a local conservative advocacy group, has likened these 30-minute yoga classes to religious indoctrination. They say the classes — part of a comprehensive program offered to all public school students in this affluent suburb north of San Diego — represent a violation of the First Amendment.

After the classes prompted discussion in local evangelical churches, parents said they were concerned that the exercises might nudge their children closer to ancient Hindu beliefs.

Mary Eady, the parent of a first grader, said the classes were rooted in the deeply religious practice of Ashtanga yoga, in which physical actions are inextricable from the spiritual beliefs underlying them.

Ms. Eady and a few dozen other parents say a public school system should not be leading students down any particular religious path. Teaching children how to engage in spiritual exercises like meditation familiarizes young minds with certain religious viewpoints and practices, they say, and a public classroom is no place for that.

Underlying the controversy is the source of the program’s financing. The pilot project is supported by the Jois Foundation, a nonprofit organization founded in memory of Krishna Pattabhi Jois, who is considered the father of Ashtanga yoga.

Dean Broyles, the president and chief counsel of the National Center for Law and Policy, a nonprofit law firm that champions religious freedom and traditional marriage, according to its Web site, has dug up quotes from Jois Foundation leaders, who talk about the inseparability of the physical act of yoga from a broader spiritual quest. Mr. Broyles argued that such quotes betrayed the group’s broader evangelistic purpose.

“There is a transparent promotion of Hindu religious beliefs and practices in the public schools through this Ashtanga yoga program,” he said.

“The analog would be if we substituted for this program a charismatic Christian praise and worship physical education program,” he said.

The battle over yoga in schools has been raging for years across the country but has typically focused on charter schools, which receive public financing but set their own curriculums.

The move by the Encinitas Union School District to mandate yoga classes for all students who do not opt out has elevated the discussion. And it has split an already divided community.

Opponents of the yoga classes have started an online petition to remove the course from the district’s curriculum. They have shown up at school board meetings to denounce the program, and Mr. Broyles has threatened to sue if the board does not address their concerns.

The district has stood firm. Tim Baird, the schools superintendent, has defended the yoga classes as merely another element of a broader program designed to promote children’s physical and mental well-being. The notion that yoga teachers have designs on converting tender young minds to Hinduism is incorrect, he said.

“That’s why we have an opt-out clause,” Mr. Baird said. “If your faith is such that you believe that simply by doing the gorilla pose, you’re invoking the Hindu gods, then by all means your child can be doing something else.”

Ms. Eady is not convinced.

Russell Case, a representative of the Jois Foundation, said the parents’ fears were misguided.

“They’re concerned that we’re putting our God before their God,” Mr. Case said. “They’re worried about competition. But we’re much closer to them than they think. We’re good Christians that just like to do yoga because it helps us to be better people.”