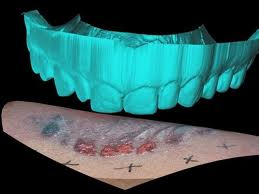 At least 24 men convicted or arrested based largely on bite-mark evidence have been exonerated by DNA testing, had charges dropped or otherwise been proved not guilty. Many spent more than a decade in prison, and one man was behind bars for more than 23 years before he was exonerated. One man is still in prison as an appeal works through the courts. The Associated Press compiled this list of some of the more notable cases using court records, news reports and information from the Innocence Project.

Brooks, of Brooksville, Miss., was convicted in 1992 of raping and killing his ex-girlfriend’s 3-year-old daughter and sentenced to life in prison after Dr. Michael West testified marks on the girl were human bites that matched Brooks.

In a separate but similar case, Brewer, also of Brooksville, was convicted in 1995 of raping and killing his girlfriend’s 3-year-old daughter and sentenced to death after West testified marks on her body matched Brewer’s teeth.

Later, DNA testing in both cases matched a man named Justin Albert Johnson, who confessed. Johnson, who had been an initial suspect in the Brooks case and had a history of raping women and girls, was convicted and sentenced to life in prison, while the bite marks on both girls later were determined to be more likely made by crawfish and insects in water where their bodies were dumped.

Although Brewer’s conviction was vacated while he awaited execution in 2001, he was held in prison until 2008 because the prosecutor said he was going to retry him. Brooks also wasn’t released until 2008.

Collins, of Santa Fe, N.M., was arrested in 1989 and imprisoned for five months in the rape and killing of his 22-year-old stepdaughter, Tracy Barker, even though a condition prevented Collins from producing sperm, which was found on Barker’s body.

A forensic dentist had concluded that a mark on Barker’s neck was a bite mark and matched Collins, and prosecutors vowed to seek the death penalty.

Collins was declared innocent after his attorneys revealed his medical condition and argued that the mark on Barker’s neck was left when she was strangled and was not a bite mark.

Fifteen years later, the sperm found on Barker was entered into a national database not available at the time of the crime and matched Chris McClendon, a former Santa Fe ski instructor who had been convicted in a separate 1999 case of kidnapping and raping a 24-year-old Santa Fe waitress.

McClendon pleaded no contest in Barker’s killing to avoid the death penalty and is serving multiple life sentences.

Jackson, of Natchez, Miss., was convicted in 1989 of rape in Marrero, La., 180 miles from where he lived, after the victim identified him in a lineup and a forensic dentist testified that bite marks matched Jackson’s teeth, even though Jackson’s brother, Milton Jackson, confessed to the rape just days after the crime and Jackson lived far away.

DNA testing later showed Jackson was innocent, and he was exonerated in 2006.

Krone, of Phoenix, was convicted in 1992 and again in 1996 after winning a new trial in the death of a Phoenix bartender who was found naked and stabbed in the men’s restroom of her workplace. He spent a decade in prison, three of them on death row. Dr. Ray Rawson testified at both trials that bite marks on the bartender’s breast and neck could have come only from Krone.

The jury at Krone’s second trial found him guilty despite three top forensic dentists who testified for the defense that Krone couldn’t have made the bite marks.

In 2002, DNA testing matched a different man and proved Krone’s innocence, and Krone was released.