WHY DO JUVENILES FALSELY CONFESS TO CRIMES MORE THAN ADULTS? 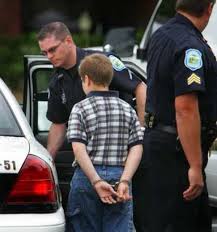 In 2011, a 16-year-old confessed to being the getaway driver in a fatal shooting of a Los Angeles man, leading prosecutors to charge the teen and three others with murder.

But defense lawyers found convenience-store video showing the suspects were nearly four miles from the murder scene a minute before the man was shot. The lawyers argued that a detective had coerced the teen, who was drunk, into confessing to a crime he didn't commit. Prosecutors last December dropped the charges—and the possibility the four would spend life in prison.

Anthony Caravella, in white shirt, after he was exonerated of rape and murder charges in 2010 due to DNA evidence.  He had confessed at age 15. 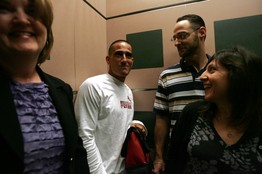 Juveniles are more likely than adults to confess to crimes they didn't commit, a growing body of evidence suggests. Thirty-eight percent of exonerations for crimes allegedly committed by youth under 18 in the last quarter century involved false confessions, compared with 11% for adults, according to a new database of 1,155 individuals who were wrongly convicted and later cleared of all charges.

The Supreme Court noted in a 2011 opinion on interrogating juveniles that studies suggest the risk of false confessions is "more acute" among youth.

"Juveniles are particularly vulnerable: they tend to impulsive, they tend to be more focused on short-term gratification like 'If I confess can I go home?' " said Steven Drizen of the Center on Wrongful Convictions at Northwestern University School of Law, which is compiling the new database, called the National Registry of Exonerations, working with the University of Michigan Law School. "They tend to be more deferential to authority; that might not seem like it's the case in the real world, but in the interrogation room it is."

Courts, state legislators and police are beginning to grapple with how to conduct juvenile interrogations in light of exonerations and research into how the teen brain works. The International Association of Chiefs of Police made recommendations for the first time last year on how to question juveniles to avoid false confessions, including recording interviews and avoiding long interrogations, deception, leading questions and promises of leniency.

In California, a bill headed for a final vote in the legislature would require all interrogations of juvenile murder suspects be videotaped so judges and juries can see confessions. "It will make law enforcement act more appropriately toward juveniles and, secondly, if they are too coercive or cross a line we will be able to see what happened," said Sen. Ted Lieu, a Democrat who sponsored the bill.

That viewpoint doesn't sit well with Alameda County Sheriff Gregory Ahern, president of the California State Sheriffs' Association, which opposes the bill. "Law enforcement works very hard to validate their interviews—we're very transparent on how we take statements," said Mr. Ahern. "To make those requirements in each and every case doesn't seem to be reasonable to us at this time."

Daniel Taylor, cleared this year of a 1992 double murder in Chicago after spending 20 years behind bars, said he confessed as a 17-year-old because he was afraid police would continue to hit him in the side with a flashlight. "I just wanted to make it stop," said Mr. Taylor, now 38. "If I'd known what I know now, I would've taken a beating and kept my mouth shut."

Records showing Mr. Taylor was in police lockup for disorderly conduct at the time of the murder helped win his exoneration. He said police shouldn't be allowed to be as aggressive or use the "level of trickery" with teens that they do with adults. (In Illinois, 17-year-olds are considered adults in the criminal justice system, although in most states they are considered juveniles.)

A spokesman for the Chicago Police Department said "a number of advancements have been made in investigative techniques since 1992 including that we now videotape every murder interview," but didn't respond to Mr. Taylor's comments.

A Florida man, Anthony Caravella, spent almost 26 years in prison for a 1983 rape and murder, but he was exonerated in 2010 due to DNA evidence.

Earlier this year, a jury awarded him $7 million in damages against officers whom the jury found had coerced his confession when he was age 15 and had an IQ of 67. Lawyers for the officers argued they had followed proper procedures.

On the night that 25-year-old Wilbert Gaitan was killed in Los Angeles, police said they pulled over the 16-year-old and his friends, members of a gang called the Drifters, and found a gun in the car. During the interrogation, Detective Matthew Gares introduced key details of the crime, including that it occurred on 11th Street and other facts. "Tell me about shooting the guy on the bike," he said, according a transcript.

The 16-year-old pleaded that he wanted to "go home to my daughter and hug her" and said he was too drunk to remember what happened. He said he recalled driving to a different location. Finally he gave in, saying "We were right there on 11th...We got out of the car and they shot."

But the convenience-store video changed prosecutors' minds about the confession, said Jean Guccione, a spokeswoman for the Los Angeles County district attorney. "If the time stamp is correct, it would've been virtually impossible for them to be at the murder scene," she said. "We think it may have been a false confession, but we don't believe it was a coerced confession."

Darryl Exum, the teen's lawyer, said the detective fed his client information to get the admission. "He was 16 and he was [at] twice the legal limit," of alcohol, said Mr. Exum. "If they had asked my client if he had killed President Kennedy, he would've said yes."

A Los Angeles Police Department spokesman declined to answer questions about the case from The Wall Street Journal.

During a preliminary hearing in July 2012, Mr. Gares said he was trying to get the truth out of the 16-year-old. "They need to know that you got them," said Mr. Gares. "It's different interviewing gang members and interviewing an average citizen." Mr. Gares didn't return a message seeking comment.

The four ended up pleading guilty to conspiracy to commit assault based on text messages prosecutors said meant they were hunting for rival gangs that night. The 16-year-old was sentenced to nine years and one of the adults to 13 years. The others were sentenced to time served.

"The average American doesn't understand, 'How could you confess to something you didn't do?' " said James Blatt, an attorney for one of the defendants who discovered the video. "When you're a good interrogator, you can break 'em."