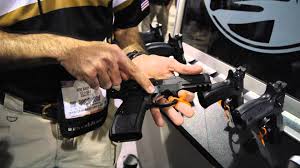 In Ohio alone, there are at least 70 public gun shows every year.

They are visited by collectors of antique firearms, historians, target shooters and hunting enthusiasts—and are often your neighbors. It’s estimated about one of every three Ohioans owns one or more guns.

But do gun show attendees know recent evidence exists that suggested the Drug Enforcement Administration (DEA) and the Bureau of Alcohol, Tax, Firearms and Explosives (ATF) may have monitored visits to gun shows through the use of automatic license plate readers?

Although the U.S. Department of Justice claims this was just a "proposal" by one agent and never carried out, it’s enough to make anyone who goes to these types of events wary. These readers automatically scan each vehicle that passes. The information that’s obtained and stored in a database can be used to track a vehicle’s movements over time.

Law enforcement agencies need to detect and shut down illegal gun trafficking operations, which use these shows to market their wares. But an automatic license plate reader cannot tell the law-abiding historian, collector, or outdoor sportsman from the criminal transporting or selling guns illegally.

License plate readers are good when they tell police where a car in a criminal investigation is. But, according to an ACLU report, "that accounts for a tiny fraction of license plate scans, and too many police departments are storing millions of records about innocent drivers. Private companies also are using license plate readers and sharing the information they collect with police with little or no oversight or privacy protections." In fact, federal bureaus, state governments, city police forces and companies around the country are increasingly cited for abuses of these readers, ranging from finding out who goes to mosques to getting data on bar patrons.

For more information on the subject of license plate tracking, read "You Are Being Tracked: How License Plate Readers Are Being Used to Record Americans’ Movements."

It’s not a big stretch to imagine anyone researching, for example, American Civil War firearms for a graduate thesis conceivably having his or her travel tracked and shared among government agencies. Or consider the dad taking his son out to the target shooting range and stopping off at the gun show afterward. Or the mom signing up for gun safety classes at one of these events. Or the hunter you know who is looking for a good buy on shooting jackets.

Knowing most gun show attendees are law-abiding citizens, the ACLU advocates for their privacy rights. The ACLU supports adopting legislation limiting uses of license plate readers, the length of time data can be kept, and who can and can’t access the data.

So, Ohioans, when you go to a few of those 70 gun shows around our state this year, you might want to give a bit of credit to the ACLU for its efforts to keep Big Brother away from recording your license plate number at those events—and elsewhere as well.