USING DNA TO SKETCH WHAT VICTIMS LOOK LIKE; SOME CALL IT SCIENCE FICTION 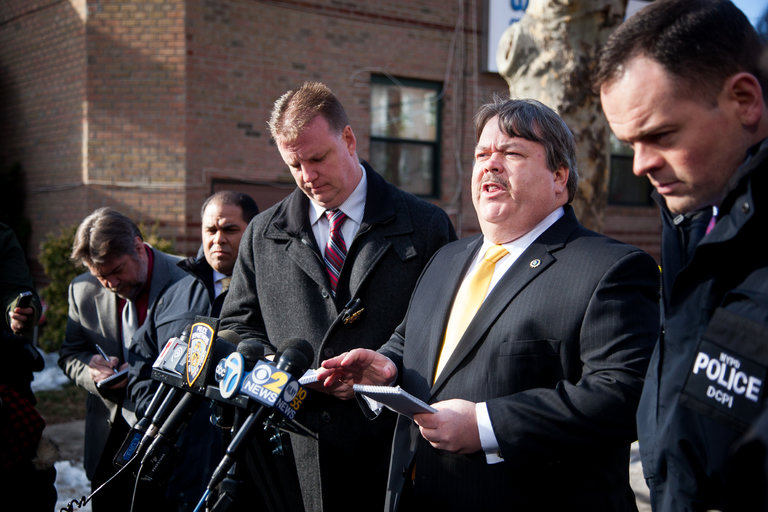 Chief Patrick Conry, second from right, defended the Police Department’s use of a technique that predicts unidentifiable victim’s appearances from DNA. “Once we identify the deceased, it’d go a long way to solving the crime itself,” he said. Credit Michael Nagle for The New York Times.

Freezing winds whipped the snow-covered coastline of Brooklyn’s Calvert Vaux Park on the day two years ago that a severed hand washed up on the rocks.

A bird-watcher found it on Jan. 4, 2015, according to the New York Police Department, which later recovered a foot and rib cage from the same body. The medical examiner determined the body parts had come from a woman between the ages of 20 and 45. A tattoo of a red heart and a rose on a patch of skin clinging to her calf offered what the police believed was her name: Monique. But what Monique looked like remained a mystery.

When a public appeal for help failed to generate leads, the Police Department turned to a forensic technique called phenotyping, which uses DNA from the biological matter people leave behind, like skin and blood, to predict their appearance.

“Once we identify the deceased, it’d go a long way to solving the crime itself,” said Chief Patrick Conry, who was chief of Brooklyn detectives and is now a senior official at Police Headquarters.

In phenotyping, scientists scan a person’s genes for variations known to influence traits like skin color, eye color, geographical ancestry and freckling. They then plug those markers into a set of algorithms to generate a profile. In recent years, pharmaceutical companies like Parabon NanoLabs of Virginia have begun recreating faces.

Parabon’s tests revealed that Monique was primarily of sub-Saharan African descent, and not white as investigators had believed based on the color of the skin found on her remains.

Analysts used her sex and ancestry to create a generic sketch of a face from a database of demographic information, which they overlaid with traits gleaned from her genes: a deep brown complexion and brown eyes above a round nose.

As murder rates hover at historic lows, the Police Department is looking to emerging technologies like phenotyping to help solve old cases. The hope is that seeing a victim’s likeness will jog people’s memories. Deputy Chief Emanuel J. Katranakis, the commander of the Forensic Investigation Division, said the police have received several tips since releasing the likenesses of Monique and a male victim in another case in September.

But critics have raised concerns about the lack of peer-reviewed science behind the technology and the creeping expansion of how DNA is collected and used in criminal investigations, where it is susceptible to human bias, error and abuse.

Police officials have said they are focused on using phenotyping to help identify victims, though they have not ruled out using it to search for suspects. But relying on so few traits requires the police to cast a wide net, said Robert Perry, the legislative director of the New York Civil Liberties Union.

“The problem is, its use will place actual people, innocent of wrongdoing, under criminal suspicion without any basis in fact or science,” he said.

Chief Katranakis said that criticism overlooks phenotyping’s ability to help the police avoid targeting the wrong people in their investigations. “The power of exclusion from phenotyping is greater than that of inclusion,” he said.

For example, he said, the Police Department used the technique to determine that the suspect in the 2016 murder of a Queens jogger, Karina Vetrano, was of African descent and eventually arrested a suspect, Chanel Lewis, who is black.

Dozens of law enforcement agencies in places like Louisiana and North Carolina have similarly used phenotyping to search for suspects in cases where investigators had exhausted traditional leads.

But New York regulators say any private lab seeking to perform testing on DNA samples from New York must have authorization from state health officials.

Chief Katranakis said state approval was not necessary because the Police Department was not using the technique to identify specific individuals. But the state Department of Health said Parabon is required to obtain a license to perform phenotyping on DNA samples from New York.

The agency sent Parabon a warning last month, and Ben Rosen, a Health Department spokesman, said the company is currently seeking a permit. In an interview, Dr. Steven L. Armentrout, Parabon’s chief executive, declined to comment on the issue.

DNA testing has been around for decades, popularized on television and in the criminal justice system for its usefulness in determining paternity and ancestry. DNA collected from crime scenes is routinely used to identify suspects and to convict or exonerate the accused, usually by comparing it to a suspect’s DNA or samples in a criminal database.

Increasingly, geneticists have been discovering ways to use variations to predict specific physical traits. The potential applications might someday include allowing doctors to detect genetic diseases by scanning a patient’s face.

Parabon boasts that its Snapshot service, which police officials said cost $4,000 to $5,000 for each case, “accurately predicts the physical appearance and ancestry of an unknown person from DNA.”

Although interest in its testing has grown, Parabon has yet to publish its detailed methodology for peer review.

Much of the science around how genetics determines facial appearance has focused on the role of individual genes. But Dr. Armentrout said Parabon’s facial predictions are based on its research on how genes work together to shape the face.

“For a complex trait, this is unequivocally the way genetics works,” he said.

But critics say the company is promising more than science has determined it can deliver. Dr. Yaniv Erlich, a computer science professor at Columbia University who studies genetics, said the idea that phenotyping could meaningfully predict something as complex as individual looks is “on the verge of science fiction.”

“Ancestry?” he said. “Sure, that’s fairly simple. Kinship, too. Phenotyping with faces? Forget about it.”

The Police Department’s announcement that it was using phenotyping came amid fresh controversy over forensic DNA techniques. The state inspector general is reviewing a request from criminal defense attorneys to investigate methods used for several years by the city medical examiner’s office, an inquiry that could have implications for thousands of prosecutions.

Among scientists, the idea that phenotyping can predict faces has provoked debate. A geneticist was criticized for a recently published paper in which he claimed to be able to identify anonymous people’s faces by sequencing their genes. Reviewers and a co-author said the paper, which was intended to raise privacy concerns, overstated what was achieved.

Dr. Erlich wrote that most of the trait predictions, such as height and face shape, were made using simple demographic data rather than trait-specific markers. “It is like the authors needed to get to the supermarket and decided to build a spacecraft to make the trip,” he said.

Even amid such debates, the role of DNA in criminal investigations continues to expand in New York. The state Commission on Forensic Science, which approves methods used in state crime labs, adopted guidelines for familial testing — DNA searches for relatives of potential suspects – that took effect Wednesday, despite protests from criminal defense and civil liberties lawyers.

The Legal Aid Society, in a brief filed with the commission, said that the panel, which was lobbied by the police, prosecutors and Ms. Vetrano’s family, does not have the authority to implement familial DNA testing.

Allison Lewis, a staff attorney in Legal Aid’s DNA unit, and David Loftis, the attorney in charge of post-conviction and forensic litigation, said the expanded roles of DNA in the criminal justice system in recent years go far beyond what the Legislature had in mind when it adopted laws compelling people convicted of certain crimes to submit swabs.

They warned that without clear rules from lawmakers, the technology will be used to justify something akin to stop-and-frisk, where people in black and Latino communities are targeted for genetic surveillance, regardless of whether they are suspected of a crime.

Chief Katranakis said the Police Department was “fully aware” of the uncertainty surrounding phenotyping. Officials conducted a thorough evaluation of the science behind it and consulted with industry experts before deeming it appropriate for use in a limited number of cases where investigators have nothing to work with, he said.

Nothing is what the police had when a man’s skull was found in July 2005 in a community garden in Bedford-Stuyvesant, Brooklyn. The teeth had been removed, preventing investigators from identifying the victim with dental records. Phenotyping analysts created an image from his DNA and adjusted it to his skull shape, getting closer to what he looked like, Chief Katranakis said.

Investigators found the victim’s torso in a trash bin in East Williamsburg and traced it to 128 Gates Avenue in Bushwick, near where an accused serial killer lived when two of his teenage neighbors disappeared. Their bodies were found dismembered in 2004 and 2005.

The police are trying to determine whether the same suspect, Kwauhuru Govan, might be his killer.