TEEN CONVICTED OF RECORDING HIS CLASSMATES BULLYING HIM IN SCHOOL 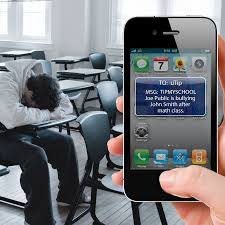 A high-school student who recorded his classmates bullying him was convicted of disorderly conduct after officials at his Pennsylvania school called police to report the "wiretapping incident."

The 15-year-old student at South Fayette High School in McDonald, Pa., said he recorded audio of the incident on his iPad because he felt like nothing was being done about the persistent bullying, report BenSwann.com and the Tribune Review. The Volokh Conspiracy examined the trial transcript and police report and came to this conclusion: "The criminal conviction seems every bit as unfounded as the news report suggests."

The student’s mother, a former Air Force Morse code operator, said she transcribed the audio before school officials forced her son to erase it, gave him a detention for making the recording and called South Fayette police.

According to the student’s mother, the recording captured one of the harassing classmtes saying, "You should pull his pants down," and another replying, "No man. Imagine how bad that [expletive] smells." At another point there is a loud slam, which the bullied student said was a book being slammed down next to him after a classmate pretended to hit him in the head with it. When the teacher intervenes, the classmate says, "What? I was just trying to scare him!" as other boys are heard laughing.

The Volokh Conspiracy says the disorderly conduct conviction apparently stems from testimony by police Lt. Robert Kurta, who was asked if the recording was a "hazardous or physically offensive condition" justifying a disorderly conduct charge. "Certainly not hazardous," Kurta replied, "but it is offensive to commit some form of a crime. Yes." Kurta also said he didn’t agree it was legitimate to record bullying. "I think to commit a crime for the purpose of proving someone else’s actions doesn’t make it right," the officer said.

According to the Volokh Conspiracy, the government’s theory is essentially that committing any crime is disorderly conduct because it is "offensive to commit some form of crime." The blog says the disorderly conduct law also requires "physically offensive conduct" and lack of a legitimate purpose, requirements that weren’t met in the student’s case. The blog also concludes there was probably no underlying crime of illegal recording under Pennsylvania law, which makes it a crime to record conversations only when there is a reasonable expectation of privacy.

The conviction is on appeal.