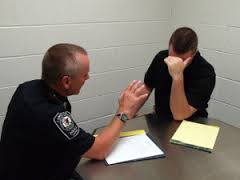 Innocent people can be questioned by police in such a way that they end up convincing themselves that they’ve committed a crime. And this belief can be so strong, they can sometimes follow that belief up with a false confession.

Early last year, a team of lawyers and statisticians published a paper stating that 4.1 percent of criminal defendants who are sentenced to death in the US are falsely convicted. To investigate this phenomenon, a study led by psychological scientist Julia Shaw from the University of Bedfordshire in the UK investigated the possible cause, and found that, if questioned in the right way, innocent people can fabricate stories in their minds with so much detail, they can falsely convince themselves that they committed a crime.

“Our findings show that false memories of committing crime with police contact can be surprisingly easy to generate, and can have all the same kinds of complex details as real memories,” Shaw said in a press release. “All participants need to generate a richly detailed false memory is three hours in a friendly interview environment, where the interviewer introduces a few wrong details and uses poor memory-retrieval techniques.”

Shaw and her colleague, forensic psychologist Stephen Porter from the University of British Columbia in Canada, started by recruiting 60 university students who had not been involved in any crimes. The researchers then asked their primary caregivers to fill out a questionaire relating to specific events these students could have experienced between the ages of 11 and 14, and were asked to elaborate as much as their memories would permit. These questions were kept a secret from the students.

Next, the students were brought into the lab to undergo three 40-minute interviews stretched over a three-week period.

During the first interview, the researchers briefly described two events to each of the students, one that the students had experienced in their teenage years (the details of which were provided by their caregiver), and one that was false, and never actually happened.

Half of these false events involved a crime that came to the attention of the police, such as an assault, an assault with a weapon, or a theft. The other 50 percent included a fake dog attack or some other kind of injury, or the loss of a huge sum of money. These events never actually happened, but the researchers peppered their descriptions with enough true details of the student’s time as a teenager - such as the name of a friend at that point in their life - to make them sound convincing.

The students were asked to explain what happened to them during each of these events. Naturally, they struggled to recall the details of the false event, but were encouraged to keep trying, and the researchers suggested they try various memory strategies to help them ‘remember’.

During the second and third interviews, the following weeks, the students were once again asked to recall what happened during both the true and false events. As they were describing certain features of their memories, they were asked to state how vivid these memories were, and how confident they were that these were the truth.

Publishing their results in the journal Psychological Science, Shaw and Porter found that of 30 students who were told they’d committed a crime in their teenage years, 21 - so, 71 percent - ended up developing a false memory of the event taking place. Of the 20 who were told they committed some kind of assault, either with or without a weapon, 11 were able to describe in incredible detail their interaction with the police on the matter - an event that never happened.

Similarly, 76.6 percent of the 30 students who were fed false stories about their teenage years that weren’t of a crimal nature ended up forming false memories about them too.

The researchers report that when they compared the false stories, the false crime memories ended up just as detailed as the false emotional memories, right down to similar ratings of confidence, vividness, and sensory detail, as determined by the students. It was those small, true details that convinced the students of a much bigger lie.

“In such circumstances, inherently fallible and reconstructive memory processes can quite readily generate false recollections with astonishing realism. In these sessions, we had some participants recalling incredibly vivid details and re-enacting crimes they never committed,” Shaw said. “This research speaks to the distinct possibility that most of us are likely able to generate rich false memories of emotional and criminal events.”

The researchers say what they found could have huge implications for the criminal justice system when it comes to recording suspect and witness testimonies. And all those Serial fans out there understand the weight a witness testimony can carry with the jury and judge presiding over a case that's lacking in physical evidence.

“Understanding that these complex false memories exist, and that ‘normal’ individuals can be led to generate them quite easily, is the first step in preventing them from happening,” says Shaw in the press release. “By empirically demonstrating the harm ‘bad’ interview techniques – those which are known to cause false memories – can cause, we can more readily convince interviewers to avoid them and to use ‘good’ techniques instead.”