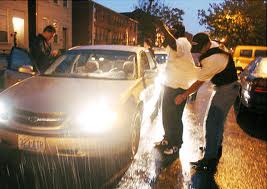 In a repudiation of a major element in the Bloomberg administration’s crime-fighting legacy, a federal judge has found that the stop-and-frisk tactics of the New York Police Department violated the constitutional rights of minorities in New York, and called for a federal monitor to oversee broad reforms.

In a blistering decision issued on Monday, the judge, Shira A. Scheindlin, found that the Police Department had "adopted a policy of indirect racial profiling" that targeted young minority men for stops. Mayor Michael R. Bloomberg said the city would appeal the ruling, angrily denouncing the judge for deliberately not giving the city "a fair trial."

The mayor cited the benefits of stop-and-frisk, crediting the tactic for making the city safer and for ridding the streets of thousands of illegal guns.

But in her ruling, Judge Scheindlin found that in doing so, the police systematically stopped innocent people in the street without any objective reason to suspect them of wrongdoing.

The stops, which soared in number over the last decade as crime continued to decline, demonstrated a widespread disregard for the Fourth Amendment, which protects against unreasonable searches and seizures by the government, as well as the 14th Amendment’s equal protection clause, according to the 195-page decision.

Judge Scheindlin’s criticism extended beyond the conduct of police officers; in holding the city liable for a battery of constitutional violations, the judge found that top police officials acted with deliberate indifference. She said that police commanders were content to dismiss allegations of racial profiling as "a myth created by the media."

Citing statements by the mayor and Police Commissioner Raymond W. Kelly, Judge Scheindlin accused the city of using stop-and-frisk as a checkpoint-style policing tactic, with the intent of deterring minorities from carrying guns on the street.

"I also conclude that the city’s highest officials have turned a blind eye to the evidence that officers are conducting stops in a racially discriminatory manner," she wrote.

The judge designated an outside lawyer, Peter L. Zimroth, to monitor the Police Department’s compliance with the Constitution.

Judge Scheindlin also ordered a number of other remedies, including a pilot program in which officers in at least five precincts across the city will wear body-worn cameras in an effort to record street encounters. She also ordered a "joint remedial process" — in essence, a series of community meetings — to solicit public input on how to reform stop-and-frisk.

The decision to install Mr. Zimroth, a partner in the New York office of Arnold & Porter LLP, and a former corporation counsel and prosecutor in the Manhattan district attorney’s office, will leave the department under a degree of judicial control that is certain to shape the policing strategies under the next mayor.

The Supreme Court had long ago ruled that stop-and-frisks were constitutionally permissible under certain conditions, and Judge Scheindlin stressed that she was "not ordering an end to the practice." But she said that changes were needed to ensure that the street stops were carried out in a manner that "protects the rights and liberties of all New Yorkers, while still providing much needed police protection."

The judge found that the New York police were too quick to deem as suspicious behavior that was perfectly innocent, in effect watering down the legal standard required for a stop.

"Blacks are likely targeted for stops based on a lesser degree of objectively founded suspicion than whites," she wrote.

She found that in their zeal to identify concealed weapons, officers sometimes stopped people on the grounds that the officer observed a bulge in the person’s pocket; often it turned out that the bulge was caused not by a gun but by a wallet.

"The outline of a commonly carried object such as a wallet or cellphone does not justify a stop or frisk, nor does feeling such an object during a frisk justify a search," she ruled.

She emphasized what she called the "human toll of unconstitutional stops," noting that some of the plaintiffs testified that their encounters with the police left them feeling that they did not belong in certain areas of the cities. She characterized each stop as "a demeaning and humiliating experience."

"No one should live in fear of being stopped whenever he leaves his home to go about the activities of daily life," the judge wrote. During police stops, she found, blacks and Hispanics "were more likely to be subjected to the use of force than whites, despite the fact that whites are more likely to be found with weapons or contraband."

The ruling, in Floyd v. City of New York, follows a two-month nonjury trial in Federal District Court in Manhattan earlier this year over the department’s stop-and-frisk practices.

Judge Scheindlin heard testimony from about a dozen black or biracial men and a woman who described being stopped, and she heard from statistical experts who offered their conclusions based on police paperwork describing some 4.43 million stops between 2004 and mid-2012.

But the stops were not the end of the problem, Judge Scheindlin found. Officers often frisked these people, overwhelmingly young black and Hispanic men, for weapons or searched their pockets for contraband, like drugs, according to the decision. Those encounters typically ended with the police letting the person go for lack of evidence of criminality.

Blacks and Hispanics were stopped about 88 percent of the time, a disparity that the Police Department has sought to explain by saying that it mirrored the disproportionate percentage of crimes committed by young minority men. In severe language, Judge Scheindlin dismissed the Police Department’s rationale.

Rather, Judge Scheindlin found, the city had a "policy of targeting expressly identified racial groups for stops in general."