Can personal tattoos be used against the accused? 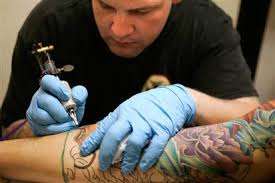 Criminals have long used tattoos as indelible ink on their own bodily rap sheet. And for just as long, police have used them as a way to identify suspects, a distinguishing characteristic to jog a memory or catch the public's eye.

But only rarely does body art play a pivotal role as evidence posited as proof of wrongdoing.

Prosecutors trying to convict former New England Patriot Aaron Hernandez in a pair of homicide cases could try to use the one-time football star's tattoos against him: They are seeking the artists who worked on Hernandez, saying they could be witnesses.

Criminal justice experts, however, say it's hard for law enforcement to determine whether someone with a tattoo linked to a kind of crime actually did the deed. As Todd Bettencourt, a tattoo artist in North Attleborough, Massachusetts — the town where Hernandez was living at the time of the killings — said, ''some people just get it because it's cool.''

Much of Hernandez's upper body is covered in tattoos: The open-mouthed face of a lion sits atop his right bicep, ringed by the words ''It's about the fight in you;'' ''1989,'' his birth year, spans the fingers of his left hand and a 10-word phrase favored by his father, ''If it is to be it is up to me,'' runs down his left forearm.

It is Hernandez's right forearm that has piqued the interest of investigators, though they will not specify which design they have focused on.

Hernandez is accused of fatally shooting two men — Daniel de Abreu and Safiro Furtado — and wounding a third in Boston in July 2012. He also is charged in last year's killing of Odin Lloyd, whose body was found near Hernandez's home. And he is being sued by an associate who says Hernandez shot him in the eye in Miami last year.

Photos of Hernandez show he has had five stars and other tattoo work added to his right forearm over the past few years. While many star tattoos have nothing to do with crime, they can sometimes be used to represent killings, said Kevin Waters, a criminal justice professor at Northern Michigan University and former agent with the federal Drug Enforcement Administration.

''I would say the cops probably see the stars and know in some circles that a star does represent a kill and want a tattoo artist to come in and see if he (Hernandez) said anything about that,'' Waters said.

Every once in a while, criminal investigators do hit the jackpot. That was the case with Southern California gang member Anthony Garcia, who was convicted of murder and sentenced to 65 years in prison in 2011 after a homicide investigator discovered that Garcia had the scene of an unsolved 2004 murder inked on his chest.

In April, an Indiana judge ordered William Clyde Gibson to grow out his hair to cover a new tattoo — ''Death Row X 3'' — before the twice-convicted murderer went on trial for allegedly killing a third person. That same month in Kansas, Jeffrey Chapman was given permission to wear a turtleneck to cover a tattoo of the word ''murder'' spelled backward on his neck, amid concerns it would prejudice the jury at his upcoming murder trial.

In Hernandez's case, officials said they have received several responses to their plea for information for tattoo artists who worked on him, but they wouldn't elaborate. Boston police and the Suffolk County District Attorney's Office said the artists would be considered witnesses and are not accused of any wrongdoing.

Even if investigators do find the artists who created the tattoos they are interested in, it's not clear they would talk. Artists say clients do often share personal information, but there is a split within the tattoo community about whether there is artist-client confidentiality.

Bettencourt, who said he never worked on Hernandez, said there are no clear rules and, besides, the stars on Hernandez's arm could have been added just as part of a design to make the tattoo work appear fuller.

But Joe Capobianco, a tattoo artist in New Haven, Connecticut, and a judge on the Oxygen Network television show ''Best Ink,'' said there is definitely ''an unwritten code.''

Although he's never been put in such a position — he has a personal policy of not doing gang tattoos or designs that represent crimes — the code is clear.

''The stories I'm told are confidential and told to me in confidence, and that goes for even the cops I tattoo too!'' he said in an email. ''I hear both sides of the coin good and bad.''

Messages seeking comment were left for Hernandez's lawyers. They have said Hernandez looks forward to proving his innocence.

Hernandez has said all his tattoos have personal meaning. The stars on his right forearm surround a tattoo depicting being in God's hands, which he told USA Today in 2009 was meant as a nod to his older brother and late father.

The motto frequently used by his father, ''If it is to be it is up to me,'' holds special meaning, he told WBZ-TV in Boston.

''It's basically saying my life's in my hands, and whatever I want my life to be it's up to me to make it out that way,'' he said.