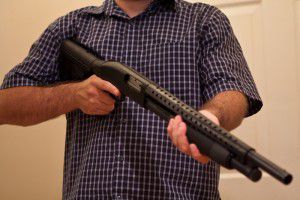 ST. PAUL, Minn. — A central Minnesota man accused of killing two teenagers who allegedly broke into his home has been indicted on first-degree murder charges.

A grand jury indicted Byron David Smith, 64, of Little Falls under seal Wednesday, April 25, 2013, on two counts of first-degree murder with premeditation. He allegedly shot and killed Haile Kifer, 18, and Nicholas Brady, 17, on Thanksgiving Day. The teenagers were cousins.

Smith told authorities he shot the teenagers after they broke into his home. Smith said he called a neighbor the next day to ask for a recommendation for an attorney. The neighbor called the Morrison County Sheriff.

Smith, a retired security engineer who worked overseas for the U.S. Department of State, was initially charged with two counts of second-degree murder. He was released from jail in December after posting bond.

"We look forward to proving this case ... and bringing justice to these two high school students whose lives were so violently and prematurely ended," Washington County Attorney Pete Orput said in a statement. Orput is handling the case because Morrison County prosecutors cited a conflict of interest.

One of Smith's attorneys, Adam Johnson, said Smith was acting in self-defense and was defending his dwelling, in rural Little Falls. Under Minnesota law, a person may use deadly force to prevent a felony from taking place in one's home or dwelling.

A statement dictated by Johnson from Smith's defense attorneys at Meshbesher and Associates indicated they will continue arguing Smith was defending himself and his home: "Our defense is the same as it was before the indictment. He had every right to act as he did and we're going to be pursuing defenses of self-defense and defense of his house."

Smith's attorneys followed up with a written statement emailed later that read, "Mr. Smith looks forward to the time when a jury of twelve people can consider all of the evidence - from both the prosecution and the defense - in this case. Nicholas Brady and Haile Kifer broke into Mr. Smith's home by shattering a bedroom window with a metal pipe. Mr. Smith did not seek Brady and Kifer out. They sought him by violently breaking into his home on Thanksgiving Day."

According to a criminal complaint, Smith, a retired U.S. State Department employee, told authorities he feared the teens had a weapon when they entered his home on Thanksgiving Day and acknowledged firing "more shots than I needed to." He also told investigators he fired "a good clean finishing shot" into Kifer's head as she was gasping for air, the complaint said.

Prosecutors have said an audio recording Smith made of the shootings includes him telling a wounded Kifer "you're dying," before firing the final shot. Court documents show his security system also made a video recording of the teens breaking in.

"A lot of the evidence we presented has to remain secret at this point. But it'll all get presented in trial," Orput said. "I'd just ask folks to not make up their minds. Wait and listen to the evidence as it gets presented."

Authorities weren't notified of the killings until the following day when Smith asked a neighbor for a good lawyer and later asked the neighbor to call police. When police showed up, the criminal complaint said, Smith told the officers of the break-in and shooting and was arrested.

Defense attorneys have said Smith's property had been burglarized before and that he was scared.

Court documents show Brady was involved in at least two of the prior burglaries at Smith's property. Brady and Kifer also have been linked to another burglary that happened the day before they were killed. In that case, six bottles of prescription drugs were stolen and found in a car linked to them.

The case stirred up strong emotions in Little Falls, a central Minnesota town of about 8,000 people. Some believed Smith went too far by repeatedly shooting the unarmed teens, but others said he was within his rights to protect his home.

During Thursday's court appearance, Orput asked that Smith's bail be set at $2 million, given the nature of the offense. Judge Doug Anderson denied that request, and kept bail at $50,000, with conditions. Smith posted that $50,000 bail in December and has been free since then.

Orput said he'll ask to have the lesser second-degree charges against Smith dismissed as the case goes forward.