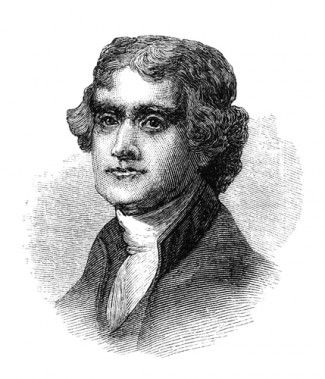 A lawyer who told jurors his capital murder client was a "professional drug dealer" and a "shooter of people" has been disbarred for "inexplicable incompetence."

The Kansas Supreme Court posted its opinion (PDF) on Friday as well as a video of oral arguments in which Dennis Hawver appeared dressed as Thomas Jefferson. (A good shot of his attire is at five minutes and 17 seconds; his argument begins at 22 minutes and 38 seconds.) The Wichita Eagle has coverage.

At trial, Hawver described his client, Phillip Cheatham Jr., as a "professional drug dealer" and a "shooter of people," according to findings of fact cited by the state supreme court. During the sentencing phase of the trial, he said the killer should be executed. "I had a single mitigator to offer the jury in sentencing," Hawver said in an affidavit, "and that was my argument that my client was innocent."

Hawver didn’t investigate alibi witnesses and didn’t track his client’s cellphone to find his location at the time of the murders, the court said.

According to previous coverage of the case, Hawver had argued at trial that his client would never have left a witness alive if he had shot the two women victims.

Hawver had never previously tried a capital murder case and had not tried a murder case in more than 20 years, according to the opinion. He was unfamiliar with ABA guidelines for trying capital murder cases. At trial, he informed the jury his client had previously been convicted of voluntary manslaughter, even though prosecutors agreed to a stipulation that the client had a prior felony conviction without further details.

Hawver had testified his client would pay him the $50,000 fee only if jurors returned a not guilty verdict. In an affidavit, Hawver also said he failed to seek dismissal of the capital charge after the Kansas Supreme Court struck down the death penalty scheme.

Hawver had said he had no funds for a pretrial investigation and he didn’t call the indigent defense board to explore whether funding was available to support his representation. He also said he didn’t recall whether a board representative had called him with an offer to provide co-counsel, investigators, consultants and expert witnesses, but he doesn’t contest that an offer of funding was made.

During the arguments, Hawver identifies Jefferson as his hero and says he wore the outfit because he had a constitutional right to represent the client "as directed, instructed and agreed" by the client, "no matter what the ABA guidelines have to say."

Hawver explained to the Kansas Supreme Court why he didn’t get cellphone records for an alibi defense. "I had no idea that cellphones had GPS capabilities at that time," he said. "Did you? I didn’t. If I had known it, I’d have been on it like a dog on a bone."

"In this court’s view the essentially uncontroverted findings and conclusions regarding Hawver’s previous disciplinary history, his refusal to accept publicly financed resources to aid in his client’s defense, and his inexplicable incompetence in handling Cheatham’s case in the guilt and penalty phases of the trial are more than sufficient to require disbarment," the court said.

The prior discipline involved Hawver’s participation in an attorney diversion program for violating the ethics rule involving competence.

FORWARD TO 22:38 OF VIDEO TO SEE HAWVER'S TESTIMONY BEFORE THE COURT