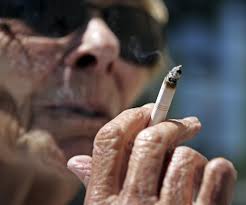 John Rizzuto waited six years to get his day in court. He sat through two weeks of testimony and trial. And, finally, he spent six agonizing hours waiting for a jury to determine whether the makers of the cigarettes he smoked for decades were partially to blame for his lung disease.

On Friday night, with his head bowed, he got the verdict he had been waiting so long to hear.

A group of six jurors found that Philip Morris USA and Liggett Group were largely responsible for his chronic obstructive pulmonary disease, or COPD.

The jury found that the cigarette companies owed $2,550,000 for Rizzuto's past and future medical expenses. The remaining $10 million in damages was for pain and suffering.

Sandwiched between two lawyers, he dabbed at his eyes and nose as the verdict was read. His attorney, Brent Bigger, rubbed his shoulder and patted him on the back.

One of the jurors pushed back tears.

"We're just grateful the jury heard our evidence and delivered a fair and just verdict for a great man from Hernando County," Bigger said, his client sitting behind him and still visibly shaken.

Rizzuto, a 66-year-old retired and widowed Spring Hill mail carrier, filed suit against Philip Morris USA and Liggett Group in 2007, claiming they are partly to blame for his lung condition.

The questions put before jurors during the two-week trial: How much blame did they deserve for his lung disease?

While acknowledging a "shared responsibility," Bigger argued the companies should pay his client compensatory and punitive damages, even though Rizzuto was the one who smoked for roughly four decades. He said the companies "created and designed nicotine-delivering devices that were marketed to ensnare teens into addictive substances, and then concealed the health consequences."

Bigger showed photos of popular actors posing and smoking. He talked about the perception of smoking when Rizzuto started at age 13. He highlighted his failed efforts to quit.

William Geraghty, an attorney for Philip Morris, portrayed Rizzuto as a man who knew the risks of smoking from the moment he took the first puff and who could have quit at any time. He questioned his health practices and why he didn't ask doctors for help in trying to quit. Why he didn't try Nicorette gum. Or the nicotine patch. Or a stop-smoking clinic.

The most emotional day of testimony came Wednesday. For hours, Rizzuto testified and was cross-examined.

He told about how he couldn't be more involved in his grandchildren's baseball games because of his COPD. About how he's never been able to walk his dog, Spike. About how hard it is for him to do chores around the house.

He also talked about his fears for the future, and being a burden on his family because he could no longer care for himself.

"Quite honestly, I don't know what I would do," he said.