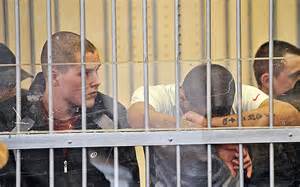 Jails across the country have become vast warehouses made up primarily of people too poor to post bail or too ill with mental health or drug problems to adequately care for themselves, according to a report issued Wednesday.

The study, "Incarceration’s Front Door: The Misuse of Jails in America," found that the majority of those incarcerated in local and county jails are there for minor violations, including driving with suspended licenses, shoplifting or evading subway fares, and have been jailed for longer periods of time over the past 30 years because they are unable to pay court-imposed costs.

The report, by the Vera Institute of Justice, comes at a time of increased attention to mass incarceration policies that have swelled prison and jail populations around the country. This week in Missouri, where the fatal shooting of an unarmed black man by a white police officer stirred months of racial tension last year in the town of Ferguson, 15 people sued that city and another suburb, Jennings, alleging that the cities created an unconstitutional modern-day debtors’ prison, putting impoverished people behind bars in overcrowded, unlawful and unsanitary conditions.

While most reform efforts, including early releases and the elimination of some minimum mandatory sentences, have been focused on state and federal prisons, the report found that the disparate rules that apply to jails is also in need of reform.

"It’s an important moment to take a look at our use of jails," said Nancy Fishman, the project director of the Vera Institute’s Center on Sentencing and Corrections and an author of the report. "It’s a huge burden on taxpayers, on our communities, and we need to decide if this is how we want to spend our resources."

The number of people housed in jails on any given day in the country has increased from 224,000 in 1983 to 731,000 in 2013 — nearly equal to the population of Charlotte, N.C. — even as violent crime nationally has fallen by nearly 50 percent and property crime has dropped by more than 40 percent from its peak.

Inmates have subsequently been spending more time in jail awaiting trial, in part because of the growing reluctance of judges to free suspects on their own recognizance pending trial dates, which had once been common for minor offenses.

As a result, many of those accused of misdemeanors — who are often poor — are unable to pay bail as low as $500.

Timed with the release of the Vera Institute report, the MacArthur Foundation announced Wednesday that it would invest $75 million over five years in 20 jurisdictions that are seeking alternatives to sending large numbers of people to jail. The jurisdictions, which could be cities, counties or other entities that run local jails, will be announced this spring.

Nationwide, the annual number of jail admissions is 19 times higher than the number of those sent to prison, and has nearly doubled since 1983, from about 6 million to 11.7 million. A significant number are repeat offenders, the report said.

In Chicago, for instance, 21 percent of the people sent to local jails from 2007 to 2011 accounted for 50 percent of all jail admissions.

The study found that the share of people in jail accused or convicted of crimes related to illegal drugs increased from 9 percent in 1983 to about 25 percent in 2013, and that they were disproportionately African-Americans.

And the study said that while 68 percent of jail inmates had a history of abusing drugs, alcohol or both, jail-based drug treatment programs had been underfunded.

Justin Volpe, 31, a peer recovery specialist in Miami for the Dade County courts, said he spent 45 days in jail in 2007 after being arrested on a petty theft charge. Mr. Volpe, who was homeless, addicted to drugs and suffering from an untreated mental illness at the time of his arrest, said drug treatment and a court-mandated diversion program that included counseling and medication had probably saved his life.

"It was the extra push I needed," he said.

But Mr. Volpe said there were too few drug and alcohol treatment programs available to those in jail, where there is a close correlation between drug addiction and mental illness.

The Vera Institute report, for instance, found that more than four of five inmates with a mental illness were not treated in jail and that 34 percent of those with mental illness in jail had been using drugs at the time of their arrest, compared with 20 percent of the rest of the jail population.

Still, seeking mental health services sometimes meant longer stints in jail, the report said. In Los Angeles, those seeking help spent more than twice as much time in custody than did others — 43 days, compared with 18 days.