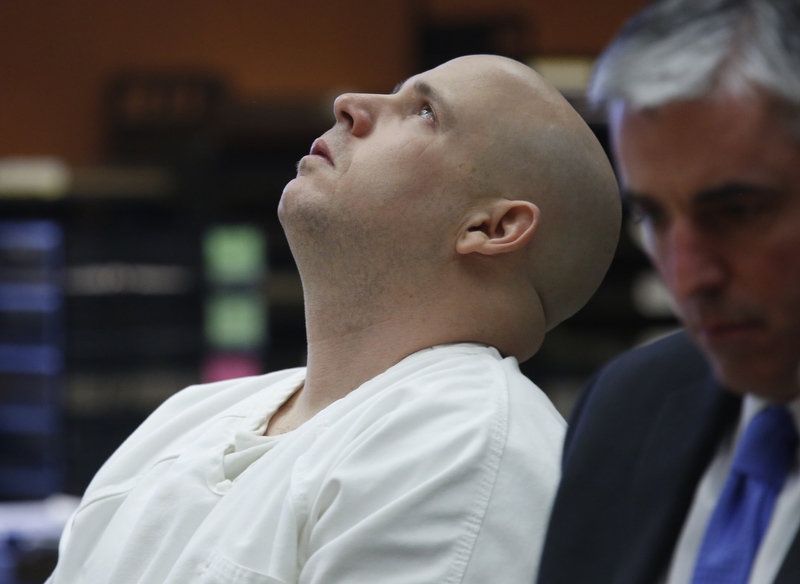 In the nearly four months since former Bloomfield Police Officer Sean Courter was placed into custody after his conviction on official misconduct and related charges for submitting false police reports about a 2012 arrest, his wife, Kristina, on Tuesday said she has seen dramatic changes in their three children.

Their 7-year-old daughter no longer sings in the shower like she used to, Kristina Courter said. Their 4-year-old daughter cries for her father at night, and their 9-year-old son wants to be alone in his room, she said.

Police Dashcam video showed the aggressive arrest of the motorist, but not any of the claims police listed in their reports.

Ex-Bloomfield cop sentenced to 5 years for official misconduct Former Bloomfield Police Officer Sean Courter, 35, of Englishtown, is sentenced before Superior Court Judge Michael L. Ravin after he was convicted by a jury on Nov. 5 of official misconduct and related charges in connection with a 2012 arrest. Courter was sentenced in Newark. February 23, 2016. (Patti Sapone | NJ Advance Media for NJ.com)

"Emotionally, mentally, physically, financially, we are at a loss due to Sean being gone," said Kristina Courter, adding that "having Sean gone has felt like a death in the family.

Standing in a Newark courtroom, Kristina Courter pointed to the impact on the children and the family's financial struggles as she implored Superior Court Judge Michael L. Ravin to show leniency in sentencing her husband.

As she spoke, Sean Courter sat a few feet away, crying in his jail uniform. Courter later stood up and also asked for the least possible sentence.

"I love my children more than anything in the world and I know they need me," Courter told Ravin.

But the judge sentenced Courter to a five-year state prison term with a five-year period of parole ineligibility, which represents the mandatory minimum sentence required under state law for the official misconduct charge against him. Courter will receive credit for 110 days of time served.

Ravin acknowledged the difficult circumstances facing Courter's family – referring to them as "gut-wrenching" – but said they don't rise to the level of "extraordinary" circumstances needed for a lesser sentence, and he declined to waive the requirement for the mandatory sentence on the official misconduct charge. Courter, 35, of Englishtown, and his co-defendant, former Bloomfield Police Officer Orlando Trinidad, were convicted by a jury on Nov. 5 of making false statements in police reports about the June 7, 2012 arrest of Bloomfield resident Marcus Jeter on the Garden State Parkway.

After reviewing police dashboard videos — including footage of Jeter with his hands raised inside his vehicle — jurors found that the officers' reports falsely claimed Jeter tried to grab Courter's gun while Courter was removing Jeter from the vehicle, and that Jeter struck Trinidad.

Following the guilty verdict, Ravin revoked the officers' bails and remanded them to the Essex County Correctional Facility.

Trinidad, 35, formerly of Bloomfield, was sentenced on Jan. 22 to five years in state prison. He also must serve the entire sentence without an opportunity to be released on parole, and he will receive credit for 78 days of time served.

During Tuesday's hearing, Jeter said he felt sorry for Courter's family and friends, but said "they weren't the ones there that night." 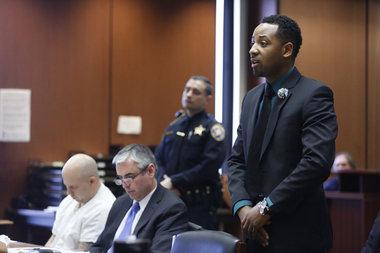 Marcus Jeter, the victim, addresses the judge. Former Bloomfield Police Officer Sean Courter, 35, of Englishtown, is sentenced before Superior Court Judge Michael L. Ravin after he was convicted by a jury on Nov. 5 of official misconduct and related charges in connection with a 2012 arrest. Courter was sentenced in Newark. February 23, 2016 (Patti Sapone | NJ Advance Media for NJ.com) Patti Sapone

Jeter noted how he was facing a possible prison sentence himself before his charges were ultimately dismissed, and said Courter broke his oath as a police officer to tell the truth.

"I'm not saying that he's not a good guy," Jeter said. "I'm just saying that in a situation like this where he has an obligation, a moral obligation to tell the truth, he chose not to."

Jeter also is pursuing a lawsuit against Bloomfield, Courter, Trinidad and other defendants in regard to the incident.

The incident occurred after Courter and then-Bloomfield Police Officer Albert Sutterlin responded to a domestic-related call at Jeter's Bloomfield home. His girlfriend's sister called 911 after Jeter threw the girlfriend's cell phone down a staircase during a verbal dispute.

After the officers arrived, Jeter left the residence. Courter has claimed Jeter was drunk and fled after he had ordered him to stop, but Jeter has said he was not drunk and that Courter indicated he could leave the residence.

Courter later stopped Jeter on the Parkway, followed by Sutterlin, and the officers approached Jeter's vehicle with their guns drawn and ordered him to get out. Trinidad arrived at the scene and struck the front of Jeter's car with his patrol vehicle.

Once Courter received approval from a supervisor, he broke the driver's side window and removed Jeter from the vehicle. Courter and Trinidad later claimed in their police reports that Jeter tried to disarm Courter and that he struck Trinidad.

Jeter was charged with eluding, attempting to disarm a police officer, resisting arrest and aggravated assault.

Dashboard video raises question of police action, prosecutor says Two Bloomfield police officers have been indicted on conspiracy and misconduct charges after a dashboard video from a police cruiser raised doubts about the officers' account of an arrest they made, according to Essex County prosecutors.

After reviewing that second dashboard video, prosecutors determined the video was inconsistent with the officers' police reports. The charges against Jeter were then dropped in April 2013 and Courter and Trinidad were indicted in January 2014.

Courter and Trinidad, who had been suspended without pay, ultimately lost their jobs as a result of their convictions.

Sutterlin, who retired in May 2013, pleaded guilty in October 2013 to falsifying or tampering with records. After testifying at the officers' trial, Sutterlin was later sentenced to two years of probation.

Sutterlin testified he included information in his police reports that Jeter tried to grab Courter's gun and that he struck Trinidad, even though Sutterlin had not witnessed those events. He said he received those details from Courter and Trinidad when he consulted with them about the sequence of events.

In arguing for a lesser sentence for Courter, his attorney, Charles Clark, on Tuesday noted how Courter has received commendations for his exemplary work as a police officer. Clark referred to the incident involving Jeter as an "aberrational event" in Courter's law enforcement career.

Saying Courter "saved lives as a police officer," Clark referred to cases where Courter evacuated people during a fire and prevented a suicidal man from jumping off a fire escape with a rope tied around his neck.

"He's led an extraordinary life as a police officer," Clark told the judge.

"In addition, this defendant took advantage of his position of trust as a law enforcement officer when he committed the offenses," said Rodriguez, who tried the case with Essex County Assistant Prosecutor Frantzou Simon.