EX-PROSECUTOR GETS JAIL FOR WRONGFUL CONVICTION 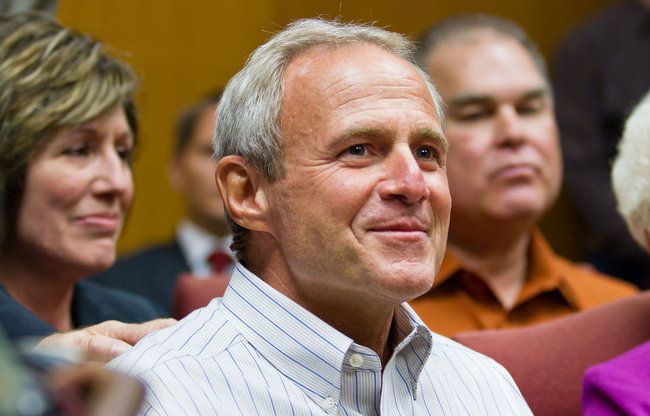 Michael Morton on the day of his release in October. He served nearly 25 years for the murder of his wife before being cleared.

A former Texas prosecutor who was charged over a wrongful murder conviction has agreed to a 10-day sentence, accepting the punishment in front of the innocent man he helped put in prison for nearly 25 years.

The former district attorney, Ken Anderson, also will be disbarred and must serve 500 hours of community service as part of a deal that is expected to end all criminal and civil cases against him.

Mr. Anderson, 61, who was the face of the law in a tough-on-crime Texas county for 30 years, never spoke in his return on Friday to the same Williamson County courthouse where he was a judge for 11 years before resigning in September.

Sitting behind Mr. Anderson in the gallery was Michael Morton, who was released from prison in 2011 after DNA evidence showed that he did not beat his wife to death in 1986.

Mr. Anderson entered a plea of no contest to contempt of court. The charge stemmed from a 1987 exchange in which Mr. Anderson, then the Williamson County district attorney, was asked by a judge if he had anything to offer that was favorable to Mr. Morton’s defense. He said no.

But among the evidence Mr. Morton’s lawyers say was kept from them were statements from Mr. Morton’s 3-year-old son, who witnessed the killing and said his father was not responsible. There were also interviews with neighbors who told the authorities that they saw another man near the Morton home before the killing.

Mr. Anderson has previously apologized to Mr. Morton for what he called failures in the system but has said he believes that there was no misconduct.

A Texas man wrongfully convicted in 1987 of murdering his wife is scheduled to be officially exonerated on Monday.

That is no longer so unusual in Texas, where 45 inmates have been exonerated in the last decade based on DNA evidence. What is unprecedented is the move planned by lawyers for the man, Michael Morton: they are expected to file a request for a special hearing to determine whether the prosecutor broke state laws or ethics rules by withholding evidence that could have led to Mr. Morton’s acquittal 25 years ago.

"I haven’t seen anything like this, ever," said Bennet L. Gershman, an expert on prosecutorial misconduct at Pace University in New York. "It’s an extraordinary legal event."

The prosecutor, Ken Anderson, a noted expert on Texas criminal law, is now a state district judge. Through a lawyer, he vigorously denied any wrongdoing in Mr. Morton’s case.

Mr. Morton, who was a manager at an Austin supermarket and had no criminal history, was charged with the beating death of his wife, Christine, in 1986. He had contended that the killer must have entered their home after he left for work early in the morning. But Mr. Anderson convinced the jury that Mr. Morton, in a rage over his wife’s romantic rebuff the previous night — on Mr. Morton’s 32nd birthday — savagely beat her to death.

Mr. Morton was sentenced to life in prison. Beginning in 2005, he pleaded with the court to test DNA on a blue bandanna found near his home shortly after the murder, along with other evidence.

For six years, the Williamson County district attorney, John Bradley, fought the request for DNA testing, based on advice from Judge Anderson, his predecessor and friend. In 2010, however, a Texas court ordered the DNA testing, and the results showed that Mrs. Morton’s blood on the bandanna was mixed with the DNA of another man: Mark A. Norwood, a felon with a long criminal history who lived about 12 miles from the Mortons at the time of the murder. By then, Mr. Morton had spent nearly 25 years in prison.

Mr. Norwood has been arrested and charged in Mrs. Morton’s death and is a suspect in a similar murder from 1988.

The filing by Mr. Morton’s lawyer, John Raley, and attorneys from the Innocence Project, a group based in New York that represents prisoners seeking exoneration through DNA testing, is asking for what is known as a "court of inquiry." The lawyers did not share the document with reporters but answered questions about it.

They will ask the court to determine that there is probable cause to believe that Mr. Anderson withheld reports that the judge in the 1987 trial had ordered him to turn over. The judge had demanded the documents to determine whether they might help Mr. Morton’s case. Finding nothing exculpatory in the small number of documents he was provided by the prosecutor, the judge ordered the record sealed.

In August, however, a different judge ordered the record unsealed, and Mr. Morton’s lawyers discovered that Mr. Anderson had provided only a fraction of the available evidence. Missing from the file was the transcript of a telephone conversation between a sheriff’s deputy and Mr. Morton’s mother-in-law in which she reported that her 3-year-old grandson had seen a "monster" — who was not his father — attack and kill his mother.

Also missing were police reports from Mr. Morton’s neighbors, who said they had seen a man in a green van repeatedly park near their home and walk into the woods behind their house. And there were even reports, also never turned over, that Mrs. Morton’s credit card had been used and a check with her forged signature cashed after her death.

In October, Judge Sid Harle of Bexar County District Court freed Mr. Morton based on the DNA evidence and authorized an unusual process allowing his defense lawyers to investigate the prosecutor’s conduct in the original trial. The lawyers questioned the lead sheriff’s investigator, an assistant district attorney who worked with Mr. Anderson and the former prosecutor himself.

In their accounts, the witnesses said Mr. Anderson had firmly controlled every detail of the prosecution. In his own two-day deposition, however, Judge Anderson said he recalled few details of the case and asserted that he had done nothing wrong. He said that he had interpreted the judge’s order to disclose the reports as a narrow demand for the initial documents from the investigation and that he felt "sick" over Mr. Morton’s wrongful imprisonment.

If the court of inquiry ends with a finding that Mr. Anderson committed serious acts of misconduct by concealing material evidence, it could lead to disciplinary action by the state bar association and possibly even a criminal prosecution.

Experts, however, are skeptical that Judge Anderson could face serious punishment or disbarment, even if the court were to decide that he had committed malfeasance. Susan R. Klein, a professor at the University of Texas Law School who specializes in criminal issues and prosecutorial ethics, said that such actions would be "incredibly unusual," particularly after the Supreme Court’s decision this year dismissing a $14 million civil jury award against a Louisiana prosecutor, Harry Connick Sr., for his failure to turn over evidence that ultimately led to an exoneration.

While withholding material evidence intentionally can get a lawyer disbarred, Ms. Klein said, "It’s extremely unlikely." In the court filing, Mr. Morton’s lawyers argue that the amount of time that has passed since the trial may not be a bar to criminal prosecution if Mr. Anderson is found to have violated a court order; they argue that there may be no statute of limitations for contempt of court under state law.

Mark Dietz, a lawyer for Judge Anderson, said that he had asked for, but had not received, the report that Mr. Morton’s lawyers plan to file on Monday. He said he worried that the report would inaccurately reflect what happened in 1987. Mr. Dietz questioned whether Judge Harle had jurisdiction to order a court of inquiry, and in a letter to Barry C. Scheck, the co-founder of the Innocence Project, wrote that while his client welcomed "positive discussion about criminal justice reforms," "false and defamatory statements regarding Mr. Anderson’s conduct as a prosecutor in the Morton case have no proper place in that discussion."

In an interview, Mr. Scheck said he hoped the court of inquiry proceeding would result in changes in law and policy that could promote greater fairness in criminal cases. Previous high-profile exonerations, he said, have led to new laws that improved access to DNA testing after conviction and provided generous compensation to those who were wrongfully convicted.

"This is one of those catalytic, iconic cases that leads to reform," he said.