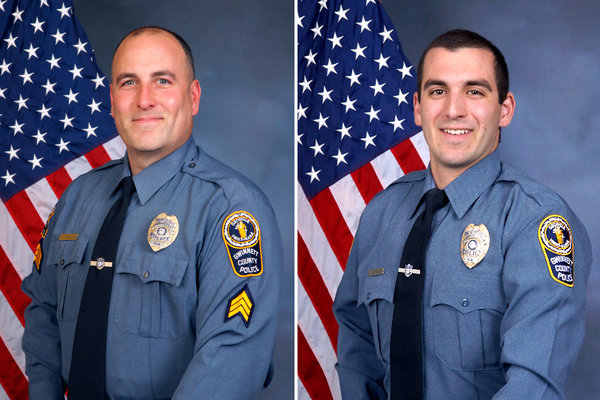 Prosecutors in Georgia have dismissed dozens of cases and are reviewing others called into question after two law enforcement officers with a central role in them were fired for kicking and punching a motorist at a traffic stop, officials have said.

Rosanna Szabo, the solicitor general for Gwinnett County, on Friday dismissed 89 cases in which the officers, Robert McDonald and Michael F. Bongiovanni, were a principal officer or a main witness, a statement from her office said.

Ms. Szabo declined to provide further details about the types of cases that were dismissed, but her office handles ordinance violations, such as traffic violations, and misdemeanors, such as trespassing, property damage and shoplifting or other crimes punishable by up to one year in jail.

Danny Porter, the Gwinnett County district attorney, said his office was reviewing up to 40 felony cases in which the officers had been witnesses. “Those that can be salvaged will be,” he said in an email on Tuesday.

The prosecutors were sifting through the cases in the aftermath of the events of April 12, in which Officer McDonald was captured on video kicking Demetrius B. Hollins, a 21-year old black man, in the head during a traffic stop near Lawrenceville, a suburb of Atlanta.

Sergeant Bongiovanni, in a separate video, was shown punching Mr. Hollins. “The actions of these officers completely undermine their credibility, and they cannot be relied upon as witnesses in any pending prosecution,” Ms. Szabo’s statement said.

When “police officers betray the public’s trust and confidence, justice demands that all those cases that depend on their credibility be dismissed without delay,” it said.

The move by the prosecutors underlines their acknowledgment of the impact that the officers’ firings could have on the county, which has a population of about 850,000.

It also highlights a process that typically takes place when an officer is disciplined for behavior that raises questions about his or her credibility as a witness in previous cases they have handled. Some cases can involve charges as serious as drug dealing or murder that could send an innocent person to prison.

“If the person is filing false reports or planting evidence, that’s a no-brainer. Every case would be reviewed,” Bill Fitzpatrick, the chairman of the National District Attorneys Association, said in a telephone interview on Tuesday. “In Gwinnett County, the D.A. was faced with pretty damning evidence regarding this incident.

“The D.A. is sending the absolute correct message that the integrity of the system is more important than some past convictions,” he added.

The case in Georgia also became another example of how cellphone videos recorded by bystanders can prompt investigations into the kind of police behavior that can fuel mistrust between mostly white law enforcement officers and black people — a consequence the police department suggested it wanted to avoid when it announced last week that the men were fired.

“The actions of these two officers have implications that will be felt for some time,” it said. “However, we also believe that our decisive action in terminating both officers speaks volumes about what is expected of each officer that wears a Gwinnett County Police badge.”

According to the Sergeant Bongiovanni’s incident report, the episode started at about 4:30 p.m. last Wednesday when he tried to pull over the Acura Integra driven by Mr. Hollins because it did not have a license plate, a light was broken and Mr. Hollins had changed lanes without signaling.

Mr. Hollins slowed down but did not stop until the car stalled, the report said. Sergeant Bongiovanni’s report said that the car had smelled of marijuana and that Mr. Hollins had begun to act strangely. Mr. Hollins ignored a request to get out of the car, he wrote.

But a cellphone video, taken by a witness and discovered online by the police, showed Mr. Hollins standing up with his hands up as he got out of the car, and Sergeant Bongiovanni punching him in the face. Another video showed Officer McDonald stomp or kick Mr. Hollins in the head as Mr. Hollins was lying on the ground with his hands cuffed.

The police department statement said that Officer McDonald, 25, used “unnecessary and excessive” force and that Sergeant Bongiovanni 41, had lied about the encounter.

Mike Puglise, Mr. Bongiovanni’s lawyer, said in an interview on Monday that his client had “followed protocol to de-escalate the situation” and that he was still considering whether to formally appeal his termination from the department. He noted that officers do not have the luxury of analyzing a video over and over.

“They have to act as the situation dictates,” Mr. Puglise said. “All we would ask is that there is not a rush to judgment.”

An attorney for Mr. McDonald could not be reached on Monday.

Mr. Hollins last week told NBC News that he had a previous “encounter” with Sergeant Bongiovanni, who “charged me with the same charges” as he was given last week, including possession of less than an ounce of marijuana, obstruction of a police officer and traffic violations.

The department said it had started a criminal investigation into the actions of both officers. Mr. Porter, the district attorney, said on Tuesday that his office expected to speak with Mr. Hollins later this week as part of that investigation.