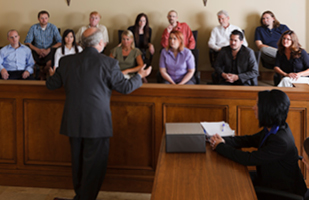 In November 2017, Ohio voters overwhelmingly approved Marsy’s Law, which enhanced the rights of crime victims, including securing the right of victims to be present in the courtroom during the trial of the accused perpetrator.

The law, which is Article I, Section 10(a) of the Ohio Constitution, took effect in February 2018. Shortly after, Ohio courts began grappling with how to implement its requirements. In November 2018, a seasoned defense attorney was shocked to find that at the trial of a Stark County man accused of rape and kidnapping, the woman accusing him of the crimes was seated next to the assistant county prosecutor at the table during jury selection.

The defense lawyer objected, stating that such a move was unprecedented and would prevent Theodis Montgomery from receiving a fair trial. For the trial judge, the seating arrangement was new, too.

“I think it’s, you know, we have a new era under Marsy’s Law and under [Ohio Revised Code Chapter] 2930 and the amendment to the Constitution. I think it’s different because I will agree with you that I have never had this particular situation arise either,” the trial judge said.

Both sides agree that under Marsy’s Law, the victim, a woman identified as A.B., had the right to be present for the entire trial, but disagree on whether that right extends to allowing the victim to sit with the prosecutor. While other state and federal courts have confronted the issues, the parties indicate this is the first time the Ohio Supreme Court will consider whether an accused’s constitutional rights to a fair trial are violated when the alleged victim sits at the prosecutor’s table during the trial.

Victim Accused Long-Time Acquaintance of Attacking Her
A.B. had known Montgomery for about 10 years. Their families became intertwined when A.B.’s father married Montgomery’s sister. Montgomery and A.B.’s father became friends, and Montgomery lived in the basement of A.B.’s father’s house in Canton. Montgomery expressed interest in having a romantic relationship with A.B., but A.B. indicated she only wanted to remain friends.

A.B.’s father called her late one evening to come to his home, telling her he and his family were leaving early the next morning for Florida. After arriving at the home, A.B. decided to spend the night and set up a space on a floor in a back room to sleep. The family left for vacation the next morning. A few hours later, Montgomery came up from the basement and discovered A.B. He yelled at her and punched her in the face. He later forced her to have sex.

Later, A.B. called the police and went to a local hospital where she received a sexual assault examination. A Canton Police Department detective received permission from A.B.’s father to search his home. Police discovered a blood-covered tissue in a waste basket that A.B. had said she used to wipe the blood from her nose after Montgomery punched her.

Montgomery was indicted on one count of kidnapping and one count of rape. At his trial, his defense attorney objected when A.B. was introduced as the state’s representative in the case and seated at the table. Typically, if any nonlawyer is seated at the table with the prosecutor during a criminal trial as the state’s representative, it is a member of the law enforcement agency investigating the crime. The trial judge permitted A.B. to sit at the table for the entire trial.

A jury convicted Montgomery on both counts, and he was sentenced to 10 years in prison on both charges, which were to run concurrently. Montgomery appealed his sentence to the Fifth District Court of Appeals, arguing, among other things, that he was denied a fair trial under the Sixth and Fourteenth Amendments to the U.S. Constitution because A.B. sat at the prosecutor’s table. The Fifth District affirmed the trial court’s decision.

Defenses Attorneys Claim Seating Arrangement Compromised Trial
State v. Montgomery has drawn the attention of the Ohio Association of Criminal Defense Lawyers, which has an filed amicus brief in support of Montgomery. The group argues that the presence of the victim at the prosecutor’s table is so prejudicial that the accused cannot receive a fair trial. The association maintains the appellate courts and the Supreme Court will never learn from the trial transcript the true effect of the seating arrangement on the jury’s perception.

The Ohio Supreme Court will hear oral arguments in this case and six others next week.